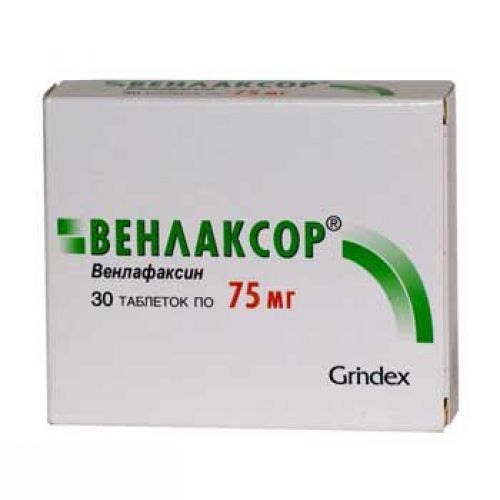 the Trade name
of Venlaksor®

name Venlafaxin Lekarstvennaya a form
of the Tablet of 37.5 mg and 75 mg

The description
of the Tablet of a ploskotsilindrichesky form, svetlorozovy color with dark pink impregnations, with a facet and risky on one party (for both dosages).

Pharmacokinetics Venlafaxin properties is easily absorbed in digestive tract. Drug is exposed to extensive presistemny metabolism, turns in a liver into an active metabolite – ortodezmetilvenlafaxin.
The maximum concentration of a venlafaxin and its metabolite in blood after oral introduction is observed in 2 and 4 hours respectively. At both substances low extent of linking with proteins of blood plasma. The half-cycle of elimination of a venlafaxin averages 5 hours, for an ortodezmetilvenlafaxin this size is 11 hours. Venlafaxin is allocated in the form of inactive metabolites and also in the free or conjugated form, generally with urine. About 20% of a venlafaxin are allocated with excrements.
The pharmacodynamics
of Venlaksor® belongs to drugs of group of antidepressants of derivatives of a feniletilamin. On chemical structure and pharmacological properties differs from other known antidepressants.
Dysregulation of the main neuromediator systems is the cornerstone of various forms of depressions. As a result of disturbance of their functions the transfer of nervous impulses in synapses is inhibited. Action of a venlafaxin is connected with potentiation of neuromediator activity in the central nervous system. Venlafaxin and his active metabolite ortodezmetilvenlafaxin inhibits neuronalny reuptake of serotonin and noradrenaline, thus, increasing quantity of these mediators in synapses. To a lesser extent, drug inhibits the return capture of dopamine in dofaminergichesky synapses.

Indications
– various forms of a depression, including the depressions which are followed by feeling of alarm

the Route of administration and doses
of Venlaksor® accept at meal time, washing down with a small amount of water. Selection of doses is individual and depends on disease severity (the maximum single dose makes 75 mg, daily – 375 mg, a course of treatment – from several months to one year).
Depressions: the usual initial daily dose makes 75 mg in 2‑3 receptions. After several weeks the daily dose can be increased up to 150 mg in 2-3 receptions. If necessary the daily dose can be increased even up to 225 mg. Usually the dose is increased by each four days by 75 mg.
In stationary conditions in a serious illness the initial daily dose makes 150 mg, in need of it gradually increase to the maximum daily dose – 375 mg which is usually divided into three receptions.
After achievement of therapeutic effect the dose should be lowered gradually.
For patients with a liver or renal failure the dose is reduced. In a liver failure of moderate severity appoint a half of a daily dose or even less, to patients with a renal failure of moderate severity – 25-50% of a daily dose.
For elderly patients of a dose usually it is not necessary to select, however at treatment it is necessary to be careful. At increase in a dose the patient has to be under careful medical observation.
Drug withdrawal of Venlaksor®
the Sudden termination of therapy of Venlaksorom® – especially after high doses of drug – can cause cancellation symptoms, in communication with what it is recommended to lower gradually before drug withdrawal its dose. Duration of the period necessary for a dose decline depends on the size of a dose, therapy duration and also individual sensitivity of the patient.

Side effects
Often
– drowsiness or insomnia, yawning, dizziness, a headache
– loss of appetite, nausea and/or vomiting at more sensitive patients, dryness in a mouth, a constipation
– an asthenia, perspiration
– nervousness, fears, a tremor
– a disorder of vision, accommodation disturbances, a mydriasis
– disturbances of a menstrual cycle, sexual functions
– disturbances of an ejaculation or an orgasm, disturbance of an erection, an anorgazmiya, dysuric disorders (generally – difficulties at the beginning of urination)
Infrequently
– decrease a libido, a menorrhagia, an ischuria
– apathy, hallucinations, spasms of muscles, a serotoninovy syndrome
– a bruxism (gnashing by teeth)
– change of laboratory indicators of a liver, hepatitis
– a hyponatremia, a syndrome of insufficient secretion of antidiuretic hormone
– hypotension, orthostatic hypotension, faints, tachycardia
– disturbance of flavoring feelings
– hemorrhages in skin (ecchymomas) and mucous membranes, skin rash
– thrombocytopenia
– reactions of photosensitivity
is rare
– short wind
– a diarrhea
– small hemorrhages on skin
– arthralgias, myalgias
– the speeded-up urination
– a ring in ears, disturbance of taste, baldness, a photophobia
– anaphylactic reactions
– changes on the ECG
Is extremely rare
– an abdominal pain, loss in weight
– dreadful dreams, numbness, a shiver
– the increased blood pressure, heartbeat, arrhythmia
– excitement, strengthening of a mania or hypomania
– an enanthesis, a hemorrhage, a Quincke’s disease, a mnogoformny erythema
– thrombocytopenia
– disturbances of the movement, a malignant antipsychotic syndrome
– an ischuria
– a galactorrhoea
– Stephens-Johnson’s syndrome
– a hyponatremia, increase in concentration of cholesterol in serum and also disturbance of functional trials of a liver
– a spasm (use of drug should be stopped)

Contraindications
– hypersensitivity to a venlafaxin or any component of drug
– a concomitant use of any antidepressant from group of inhibitors of a monoaminooxidase (iMAO) and also the period within 14 days after administration of irreversible inhibitors of a monoaminooxidase. In case of use of reversible monoamine oxidase inhibitors (for example, a moklobemida), reception of Venlaksor® is contraindicated during smaller (not less than 24 hours) time interval. After cancellation of Venlaksora® it is necessary to wait not less than 7 days before intake of monoamine oxidase inhibitors
– heavy renal failures (clearance of creatinine less than 10 ml/min.) and a liver (a prothrombin time more than 18 sec.)
– a heavy liver or renal failure
– pregnancy and the period of a lactation
– children’s and teenage age up to 18 years

Medicinal interactions
At simultaneous use of a venlaksor and warfarin strengthening of effect of warfarin is possible. At simultaneous use of drug with clozapine the risk of manifestation of side effects of the last increases.
Cimetidinum slows down metabolism of a venlaksor in a liver, at the same time does not influence metabolism of an ortodezmetilvenlafaxin which concentration in plasma is much higher. Therefore at simultaneous use of Cimetidinum and a venlaksor the additional observation only of the elderly patients and patients having a liver failure or hypertensia is necessary.
Simultaneous use of Venlaksora® with St. John’s wort drugs, agonists of receptors of serotonin, means against migraine, sibutraminy, dextromethorphan can cause heavy side effect (serotonin syndrome). Perhaps pharmakodinamichesky interaction with the drug of plant origin of a kava-kav influencing central nervous system.
In rare instances at combined use of a venlaksor and zolpidem the disorientation, hallucinations, a mania are possible. Assume that it, generally defines pharmakodinamichesky interaction of drugs, however there are also data on pharmacokinetic interaction
Use to the entakapena along with inhibitors of neuronalny capture of noradrenaline is still limited. Perhaps pharmakodinamichesky interaction of a venlaksor and the entakapena on metabolic rate.
Though Venlaksor® does not enhance the effects caused by alcohol during treatment it is necessary to refrain from alcohol intake.
Medicines, metaboliziruyemy isoenzymes of P 450 cytochrome: CYP2D6 enzyme of a system of P 450 cytochrome will transform venlafaxin to an active metabolite of the O-desmetil Venlafaxin (ODV). Unlike many other antidepressants, the dose of Venlaksora® can be not reduced at simultaneous introduction with the drugs suppressing activity of CYP2D6 or patients with genetically caused decrease of the activity have CYP2D6 as total concentration of a venlafaxin and ODV at the same time will not change. The main way of removal of a venlafaxin includes metabolism with participation of CYP2D6 and CYP3A4 therefore it is necessary to observe extra care when assigning a venlafaxin in combination with the medicines oppressing both of these enzymes. Such medicinal interactions are not investigated yet. Венлаксор® – rather weak CYP2D6 inhibitor also does not suppress activity of isoenzymes of CYP1A2, CYP2C9 and CYP3A4 therefore it is not necessary to expect it interaction with other drugs in which metabolism these liver enzymes participate.
Clinical trials did not find clinically significant interactions of Venlaksora® with antihypertensive (including beta-blockers, APF inhibitors and diuretics) and antidiabetic drugs.
As linking with proteins of plasma of a venlafaxin and ODV makes according to 27% and 30%, the medicinal interaction caused by disturbance of linking with proteins of plasma is not supposed.
At a concomitant use with Venlaksorom® the anticoagulative effect of warfarin can amplify, at the same time the prothrombin time is extended and INR (The International Normalized Relation) raises.
At a concomitant use with Venlaksorom® the pharmacokinetics of an indinavir changes (with 28% reduction of AUC and 36% decrease in Cmax), and the pharmacokinetics of a venlafaxin and ODV does not change. However the clinical value of this effect is unknown.

The special
instructions Venlaksor® should be applied with care to the patients who had a myocardial infarction or attacks of unstable stenocardia and also the persons having epilepsy, a mania, glaucoma, a liver and renal failure.
At patients with depressions before any medicinal therapy it is necessary to consider the probability of suicide attempts. Therefore for reduction of risk of overdose the initial dose of drug has to be whenever possible low, and the patient has to be under careful medical observation.
Patients with affective disorders at treatment by antidepressants, including Venlaksorom®, can have hypomaniacal or maniacal states. Венлаксор® it has to be appointed with care the patient with a mania in the anamnesis. Such patients need medical observation.
In case of sudden phase-out of a venlaksor or sharp reduction of its doses the emergence of the following symptoms is possible: powerlessness, feeling of alarm, a headache, nausea or vomiting, dizziness, dryness in a mouth, a diarrhea, insomnia, nervousness, confusion, paresthesia, the strengthened sweating, balance disturbances.
Therefore at drug use the termination of its reception it is necessary to spend more than one week gradually, the smallest within one week. If therapy by drug was carried out 6 weeks and more – drug withdrawal is made, at least, within two weeks. In order to avoid emergence of these symptoms the patient has to be under observation of the doctor. Usually these symptoms are slightly expressed and disappear within several days.
Patients at whom the daily dose of drug exceeds 200 mg have to control blood pressure.
When assigning tablets the patients with a lactose intolerance should consider lactose content in each tablet (tablets of 37.5mg-30 mg, tablets of 75mg-60 mg).
The feature of influence of medicine on ability to run the vehicle or potentially dangerous mechanisms
At reception of Venlaksora® is not recommended to run vehicles or potentially dangerous mechanisms.

To Store storage conditions in the place protected from light at a temperature not above 25 °C.
To store out of children’s reach!

the Name and the country of the owner of the registration certificate
of JSC Grindex, Latvia

the Address of the organization accepting claims for territories of the Republic of Kazakhstan from consumers on quality of products
Representative office of JSC Grindex
Almaty, Dostyk Ave, 63-65/13 corner of Shevchenko St.
of t. / f. 291-88-77, 291-13-84
e-mail: