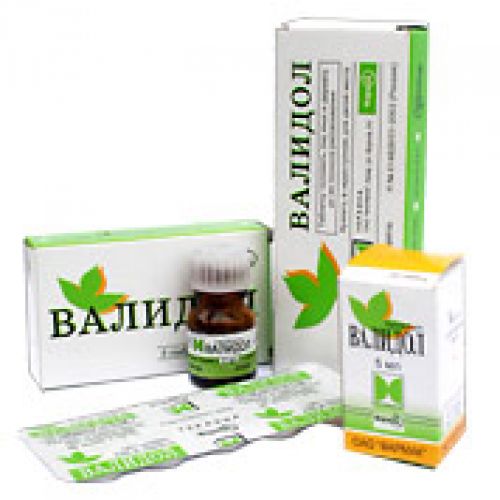 of medicine for consumers

the International unlicensed name of Menthol solution in isovalerate

the Dosage form of the Tablet hypoglossal 0.06 g Structure

of the Tablet of a ploskotsilindrichesky form, with a facet and risky, white or yellow-white color, with a characteristic smell of menthol. On a surface of tablets gray impregnations and a plaque of powder of icing sugar are allowed.

Drug properties are shown by the calming action on the central nervous system and also has moderate reflex vasodilating (koronarolitichesky) impact by reflex irritation of sensitive nervous (cold) receptors of a mucous membrane of an oral cavity. Stimulation of receptors is followed by induction of release of endorphins, enkephalins, dinorfinums and other opioid peptides which play an important role in reduction of painful sensitivity, normalization of permeability of vessels and regulation of other important mechanisms of functioning of cardiovascular and nervous systems. Under the influence of drug physiologically active agents a histamine, kinina, etc. are released.

Validol malotoksichen, has no allergenic properties, does not kumulirutsya in an organism. Effect of drug develops in 5 minutes.

At long use the slight nausea, dacryagogue, dizziness which quickly pass independently occasionally can be observed.

It is extremely rare – hypersensitivity to drug components.

during pregnancy and during feeding a breast Validol is appointed only in case the expected therapeutic effect exceeds potential negative impact of drug on a fruit and the child.

There is no experience of use of drug for treatment of children.

In therapeutic doses drug can be used at control of vehicles and work with cars and the equipment.

At overdose of drug the side effects described in appropriate section can be observed. Ordinary actions of emergency aid, symptomatic treatment are recommended. After single dose of a large number of tablets the gastric lavage, intake of activated carbon, laxative drugs is shown.

To Store storage conditions in the place, dry and inaccessible for children, at

2 years. Not to use drug after the termination of the expiration date specified on packing!