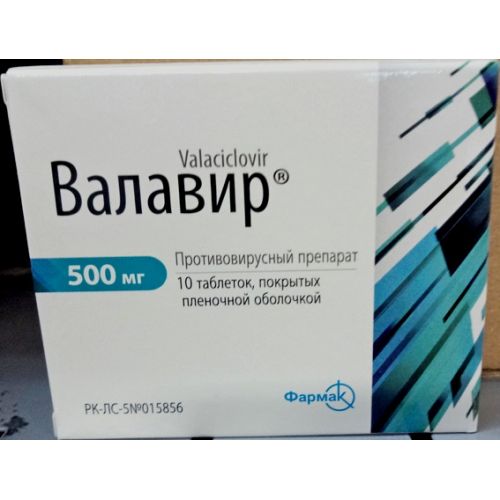 of the Tablet of oblong shape with a biconvex surface, with risky, covered with a film nacreous cover, almost white color.

The automatic telephone exchange of J05A B11

Valatsiklovir is brought with urine, mainly, in the form of acyclovir (more than 80% of a dose) and its metabolite a 9-karboksimetoksimetilguanin.

Valatsiklovir — antiviral drug, L-valinovy ether of acyclovir which is an analog of a purine (guanine) nucleoside. Is specific inhibitor of a DNA polymerase of viruses of herpes. Blocks synthesis of virus DNA and replication of viruses. In a human body valatsiklovir turns into acyclovir and valine. Acyclovir has specific activity concerning viruses of a herpes simplex (Herpes simplex virus-1) and II (Herpes simplex virus-2) of type, a virus of shingles (Varicella zoster virus), a cytomegalovirus (Cytomegalovirus), Epstein-Barr virus virus and a virus of herpes of the person of the VI type (Human herpesvirus-6). By phosphorylation, acyclovir turns into the active triphosphate of acyclovir competitively inhibiting synthesis of virus DNA. At the first stage of phosphorylation the activity of virus-specific enzyme is necessary. For a virus of a herpes simplex, a virus of shingles and Epstein-Burra’s virus it is the virus thymidinekinase which is available only in the cells infected with a virus. The partial selectivity of phosphorylation remains in a Cytomegaloviral infection and is mediated through UL97 phosphotransferase gene product. Acyclovir activation by specific virus enzyme considerably explains its selectivity.

Acyclovir phosphorylation process (transformation from mono – in triphosphate) is carried out by cellular kinases. Acyclovir triphosphate competitively inhibits a virus DNA polymerase and is built in virus DNA that leads to a complete separation of a chain, the termination of synthesis of DNA and blocking of replication of a virus.

The resistance is caused by deficit of a thymidinekinase of a virus that leads to excessive spread of a virus in the owner’s organism. Sometimes reduction of sensitivity to acyclovir is caused by emergence of virus strains from the virus thymidinekinase broken by structure or a DNA polymerase. At patients with the normal immune status the virus with reduced sensitivity to acyclovir occurs exclusively seldom and not often in patients with an immunodeficiency, for example, after bone marrow transplantation and other bodies, in the patients receiving chemotherapy in oncological diseases and at HIV-positive patients.

Valatsiklovir accelerates anesthesia at treatment of the surrounding herpes, reduces duration of a pain syndrome and also reduces the frequency of cases of patients with zosterassotsiirovanny pain, including with acute and post-herpetic neuralgia.

Prevention of a Cytomegaloviral infection by means of a valatsiklovir reduces risk of acute rejection of a transplant (patients after renal transplantation), the frequency of developing of the opportunistic infections and other infections caused by a virus of a herpes simplex and the Varicella zoster virus.

Treatment of the surrounding herpes.

Appoint to adults and children (12 years are aged more senior) 1 g of Valavir 3 times a day. Course of reception of 7 days. Therapy needs to be begun as soon as possible at the first signs and symptoms, it is the most effective in the first 48 hours.

The infections caused by a herpes simplex virus.

In case of primary disease which can proceed more hard Valavir appoint to adults and children (12 years are aged more senior) 500 mg two times a day for 5 – 10 days.

For treatment of a recurrence Valavir appoint 500 mg 2 times a day for 3-5 days.

It is necessary to begin treatment as soon as possible, for recurrent forms of infections of a herpes simplex — during a prodromal stage or right after emergence of the first symptoms.

Preventive treatment (suppression) of a recurrence of the infections caused by a herpes simplex virus in adults and children (12 years are aged more senior).

The patient with the normal immune status appoint 500 mg of drug of 1 times a day.

The patient with very frequent aggravations (for example ≥10 episodes a year) the dose of 500 mg is appointed in 2 receptions (on 250 mg 2 times a day).

To patients with an immunodeficiency appoint 500 mg 2 times a day. Duration of treatment depends on risk of emergence of a recurrence of an infection and is established by the doctor individually.

For treatment of labial herpes Valavir’s use in a dose of 2 g 2 times a day with an interval of 12 hours is possible. Duration of a course of treatment should not exceed 1 day. Therapy should be begun at emergence of the first early symptoms (feelings of tingling, an itching or burning in lips).

For prevention of infection with genital herpes of the sexual partner as suppressive therapy.

Prevention and treatment of a Cytomegaloviral infection.

To adults and children (12 years are aged more senior) Valavir appoint 2 g 4 times a day as soon as possible after transplantation.

In a renal failure the dose is reduced. Treatment duration usually is 90 days, but can be increased at patients with a high risk.

The dosing mode at patients with a renal failure:

Reduction of risk of transfer of a virus in genital herpes

Prevention of a Cytomegaloviral infection:

– dizziness, disturbance and confusion of consciousness, a hallucination,

a loss of consciousness

– skin rashes, including the photosensitization phenomena, an itching

– hypersensitivity to a valatsiklovir, acyclovir or other

of Signs of clinically significant medicinal interaction is not revealed.

Valatsiklovir is brought mainly with urine by active canalicular secretion. Drugs with the similar mechanism of removal, can increase concentration of a valatsiklovir in blood plasma.

Cimetidinum and probenetsid increase the area under a curve acyclovir concentration/time by decrease in its renal clearance, nevertheless need of dose adjustment is absent in view of the wide therapeutic index of acyclovir.

It is necessary to be careful, appointing Valavir in high doses (4 g/days) for prevention of a Cytomegaloviral infection along with drugs which compete with acyclovir for ways of removal as it can lead to increase in level in blood plasma of one or both drugs and their metabolites. At a concomitant use from the mikofenolat mofetily (the immunosuppressor drug which is applied at organ transplantation) in blood plasma the level of acyclovir and an inactive metabolite of the mikofenolat of a mofetil increases. It is necessary to appoint carefully Valavir in high doses (4 g and more) with other drugs which influence function of kidneys (for example cyclosporine, takrolimus).

For patients of advanced age in the absence of the significant changes of function of kidneys it is not recommended to change a dose. In a situation when renal failures are possible, the dose of drug needs to be adjusted.

It is necessary to support the adequate level of hydration of an organism.

Use in a renal failure (including at patients of advanced age)

Valatsiklovir is removed through kidneys, in this regard patients of advanced age with reduced function of kidneys need to reduce a drug dose. It is necessary to appoint carefully valatsiklovir the patient with a renal failure. It is obligatory to support the adequate level of hydration of an organism.

At patients with pathology of kidneys in the anamnesis the risk of development of neurologic complications increases therefore such patients demand careful observation. These reactions are in most cases reversible and disappear after drug withdrawal (see. Side effects).

To the patients who are on a hemodialysis, Valavir is recommended to apply in the same doses, as to patients with clearance of creatinine of ≤15 ml/min., the drug is taken after the procedure of a hemodialysis.

The clearance of creatinine has to be controlled constantly especially when function of kidneys can quickly change, for example right after transplantation. Respectively it is necessary to korrigirovat Valavir’s dose.

Dosing in an abnormal liver function

patients have no need for dose adjustment with cirrhosis of light or moderate expressiveness.

of Data on use of high doses of Valavir (≥4 mg/days) for treatment of patients with diseases of a liver is not present. Therefore it is necessary to appoint with care high doses of drug such patient. Special researches concerning Valavir’s use at transplantation of a liver were not conducted, however is established that prevention by means of high doses of a valatsiklovir reduces the frequency of infection and a disease of a Cytomegaloviral infection.

Reduction of transfer of a virus of genital herpes

Is not present data on safety of use of drug for children up to 12 years.

There Is no feature of influence of medicine on ability to run vehicles and potentially dangerous mechanisms data on influence of drug on speed of response, but considering that sensitive patients at use of drug can have side reactions (dizziness, disturbance and confusion of consciousness, a hallucination, a loss of consciousness), such patients should refrain from control of vehicles and performance of other works demanding concentration of attention.

Symptoms: nausea, vomiting. It was reported about cases of developing of an acute renal failure and neurologic symptoms (confusion of consciousness, a hallucination, agitation, a loss of consciousness and a coma) at patients at overdose valatsikloviry.

Many of the described cases of repeated overdose with renal failures and at patients of advanced age were caused in patients by an insufficient dose decline of drug.

Treatment: patients are subject to careful observation for timely diagnostics of toxic manifestations. The hemodialysis considerably accelerates removal of acyclovir from blood and can be considered as an optimum way of treatment.

On 6 or 10 tablets in blister strip packaging (blister).

To Store storage conditions in the dry, protected from light place at a temperature not above 25 °C.

it is not necessary to use drug after the termination of the expiration date specified on packing. 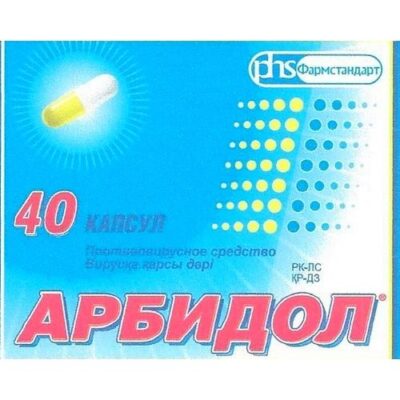 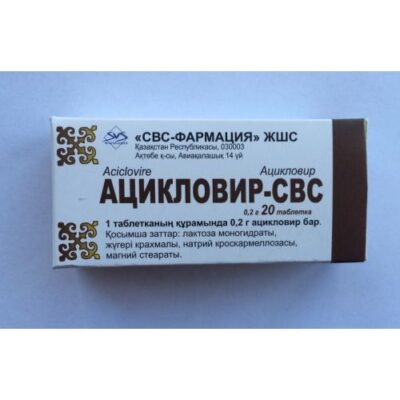 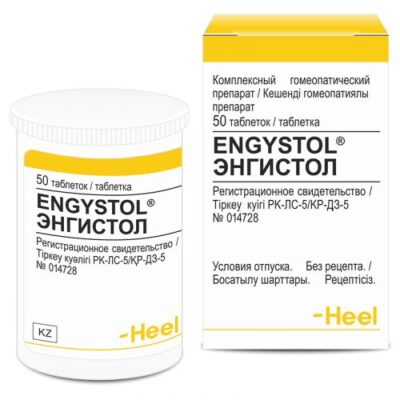 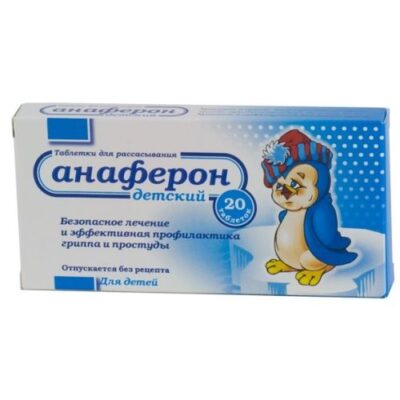 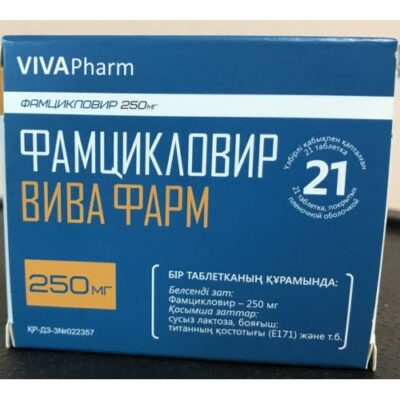 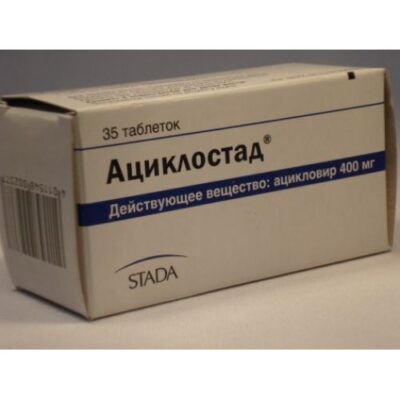 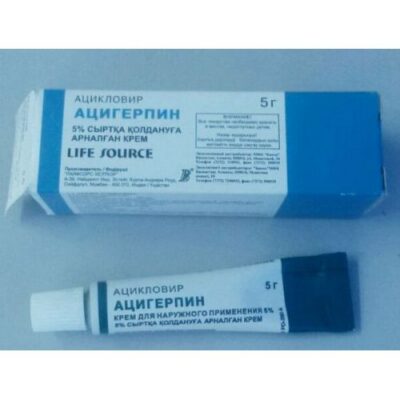