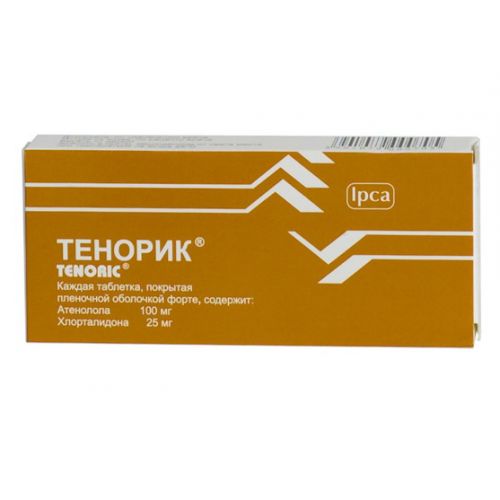 The description
of the Tablet, film coated white or almost white color, round shape with a biconvex surface, with risky on one party (for dosages of 50/12.5 mg and 100/25 mg)

Pharmacological
FarmakokinetikaPosle properties of intake atenolol is soaked up from digestive tract for 40-50%. The maximum concentration in blood plasma is reached in 2-4 hours. Atenolol is not exposed to the significant pechenony metabolism and to be removed more than 90% of the absorbed drug in an invariable look. Elimination half-life makes 6-9 hours, but can increase in cases of the profound renal failure as removal of this medicine happens, mainly, through kidneys. Linking with proteins of blood plasma approximately – 6-16%.
After intake Chlortalidonum is soaked up from digestive tract for 60%, the maximum concentration in blood plasma is noted approximately in 12 hours after administration of drug inside. Elimination half-life makes about 50 hours, and removal happens mainly through kidneys. Chlortalidonum contacts proteins of blood plasma approximately for 75%.
Simultaneous use of Chlortalidonum and atenolol makes insignificant impact on pharmacokinetics of each of them.
Tenorik is effective at least within 24 hours after single oral administration in one daily dose.
The pharmacodynamics
Tenorik – the combined antihypertensive drug, has long hypotensive effect. The effect is caused by action of two components – adrenoblocker ß1-(atenolol) and diuretic (Chlortalidonum).
Atenolol: cardioselective ß1-the adrenoblocker operating mainly on heart ß1 adrenoceptors. The selectivity decreases with increase in a dose.
As well as at use of other ß adrenoblockers, the mechanism of effect of atenolol at treatment of arterial hypertension is up to the end not found out.
Atenolol has no internal sympathomimetic and membrane stabilizing effects. It is similar other ß adrenoblockers, has negative inotropic effect, urezhat the heart rate in this connection it is not recommended to be applied in heart failure.
Chlortalidonum not thiazide sulfanamide diuretic, strengthens discharge of sodium and chlorine. Increases discharge of potassium, magnesium and bicarbonate. The mechanism by means of which Chlortalidonum lowers arterial blood pressure completely is not known, but can be connected with sodium excretion.
The atenolol combination to diuretics is possible and, as a rule, more effective, than use of each of components.

the Route of administration and doses
the Mode of dosing is given in terms of atenolol.
The average dose of drug Tenorik for adults makes 100 mg, the initial dose makes 50 mg 1 times / day.
As a rule, use of drug in the dose corresponding to 100 mg of atenolol, gives good clinical effect. The subsequent increase in a dose or does not lead to further decrease in the ABP, or reduces it very slightly. If necessary additional antihypertensive drug can be appointed.
To elderly people, it is necessary to appoint drug in lower doses.
In renal failures, it is necessary to reduce the frequency of administration of drug. After long reception of Tenorik the drug withdrawal should be carried out gradually.

Side effects
– bradycardia, strengthening of symptoms of heart failure, orthostatic hypotension (can be followed by a faint), a cold snap of extremities
– cardiac arrhythmia, AV blockade
– a symptom of the alternating lameness, Reynaud’s syndrome
– confusion of consciousness, dizziness, a headache
– change of mood, acute psychosis, hallucinations, paresthesias,
– a sleep disorder, increased fatigue, apathy, a disorientation, disorders of vision
– dryness in a mouth, diarrhea
in rare instances
– increase in level of hepatic transaminases in blood serum, hepatotoxicity with an intra hepatic cholestasia, the nausea (connected with intake of Chlortalidonum), a constipation, pancreatitis, anorexia
– a leukopenia, a purpura, thrombocytopenia, an agranulocytosis, an eozinofiya
– an alopecia, xerophthalmus, psoriazopodobny reactions, exacerbation of psoriasis, skin rash, a photosensitization.
– a bronchospasm (at patients with bronchial asthma or with instructions on a bronchospasm in the anamnesis)
– the hyperuricemia, a hyponatremia (connected with intake of Chlortalidonum), a hypopotassemia.
Other:
increase in quantity of anti-nuclear antibodies (the clinical value is not clear), decrease in potency, disturbance of tolerance to glucose.

Medicinal interactions
Simultaneous use of Tenorik with derivatives of dihydropyridine (nifedipine) can increase risk of developing arterial hypotension, patients with latent heart failure can have signs of disturbance of blood circulation.
Cardiac glycosides in combination with beta blockers can increase AV conductivity time.
Beta blockers can aggravate ricochet hypertensia which can arise after cancellation of a clonidine. If both medicines are appointed, intake of beta blocker should be stopped some days before the termination of reception of a clonidine. In need of replacement of a clonidine by beta blocker it is necessary to appoint the last in several days after the therapy termination a clonidine.
It is necessary to appoint with care beta blocker in a combination with antiarrhytmic means of the I class (Disopyramidum) since the cardiodepressive effect can be summarized.
The accompanying use of sympathomimetic means, for example, of epinephrine (adrenaline), Norepinephrinum (noradrenaline) can neutralize effect of beta blockers and lead to significant increase in the ABP.
Salicylates and NPVS (ibuprofen, indometacin), estrogen can reduce hypotensive effect of beta blockers, and at use of salicylates in a high dose strengthening of toxic effect of salicylates on central nervous system is possible.
The drugs containing lithium should not be applied with diuretics since they can reduce renal clearance of lithium.
Use of beta blockers together with means for the general anesthesia can lead to increase in risk of developing arterial hypotension and summation of negative inotropic effect of both drugs (it is necessary to use anesthetic with the minimum negative inotropic effect). Perhaps also strengthening of action of kurarepodobny muscle relaxants.
At use of the drug Tenorik with MAO inhibitors the increase in the ABP is possible (this combination should be avoided).
At simultaneous use of the drug Tenorik with APF inhibitors (captopril, enalapril) at the beginning of therapy perhaps sharp strengthening of antihypertensive effect.
At combined use of Tenorik with GKS, Amphotericinum B, furosemide potassium removal strengthening is possible.
At combined use with Tenorik the effect of insulin and oral hypoglycemic means can decrease (it is necessary to control glucose level in blood).
Tricyclic antidepressants, barbiturates, fenotiazina, diuretics, vazodilatator and other antihypertensive drugs can enhance antihypertensive effect of Tenorik.
Use of beta blockers in combination with the blockers of calcium channels having negative inotropic effect, for example verapamil, diltiazem can lead to strengthening of this effect, especially at patients with the lowered sokratitelny ability of a myocardium and/or with disturbance sinuatrial or AV conductivity that can become the cause of the heavy arterial hypotension expressed to bradycardia and heart failure (the blocker of calcium channels should not be applied in/in during 48 h after beta blocker cancellation).
At co-administration of Tenorik with reserpine, a clonidine, guanfatsiny developing of the profound bradycardia is possible.

The special instructions
Caused by the beta-blocker (atenolol) which is a part of Tenorik:
– with care to appoint the patient with atrioventricular block of the I degree
– can mask the phenomenon of a thyrotoxicosis and a hypoglycemia
– at development against the background of therapy of bradycardia (an urezheniye of a warm rhythm up to 50 reductions in min.) with clinical symptomatology it is necessary to reduce a dose or to cancel drug
– it is not necessary to cancel sharply Tenorik at the patients having coronary heart disease
– at smokers the reduction of therapeutic effect of drug can be observed
– the special attention is necessary in cases if surgical intervention under anesthetic is required from the patients accepting Atenolol. Administration of drug should be stopped in 48 hours prior to surgical intervention. As anesthetic it is necessary to choose drug with perhaps minimum negative inotropic effect.
– can increase sensitivity in relation to allergens and cause heavy anaphylactic reactions in this connection the patients who are on desensibilizirovanny therapy have to take the drug carefully. These patients can not react to usual doses of the adrenaline applied to treatment of allergic reactions
– with care to appoint the patient with a bronkhoobstruktivny syndrome, in case of deterioration in bronchial conductivity owing to reception of Tenorik appoint therapy beta-adrenergic agonists (for example, salbutamol)
– at use of atenolol the reduction of products of plaintive liquid is possible that matters for the patients using contact lenses.
Caused by effect of Chlortalidonum which is a part of Tenorik:
– there can be a hypopotassemia. Appropriate regularly to control potassium level, especially at patients of advanced age, at the patients accepting cardiac glycosides for treatment of heart failure at patients with an unbalanced diet (with the low content of potassium) or at patients with complaints to digestive tract disorders. At the patients accepting cardiac glycosides, the hypopotassemia can contribute to cordial arrhythmia
– it is necessary to show care concerning patients with the profound renal failure (see the section “Route of Administration and Doses”),
– there can be a disturbance of tolerance to glucose. It is necessary to show care in case Chlortalidonum is applied at patients with the known predisposition to diabetes
– there can be a hyperuricemia. Usually only small increase in content of uric acid in blood serum takes place, however use of the means promoting removal of uric acid in certain cases can be required.
Features of influence of medicine on ability to run the vehicle or potentially dangerous mechanisms
Tenorik’s Use, as a rule, does not influence ability to driving of motor transport and control of mechanisms. Nevertheless the issue of a possibility of driving should be resolved after assessment of individual tolerance of drug.

Overdose
Symptoms: the profound bradycardia, arterial hypotension, an acute heart failure, a bronchospasm, spasms, the increased drowsiness.
Treatment: symptomatic gastric lavage, use of activated carbon and laxatives, in arterial hypotension and shock – administration of plasma or plasma substitutes, at a brokhospazma – use of bronchodilators, in a considerable diuresis – input of the fluid and electrolytes. Carrying out a hemodialysis or hemoperfusion is possible.

To Store storage conditions in the dry, protected from light place at a temperature not over 250 With to Store out of children’s reach!

the Owner of the registration certificate
of “Ipca Laboratories Limited”, India

To Develop the e-mail address of Info@kazeuropharm.com