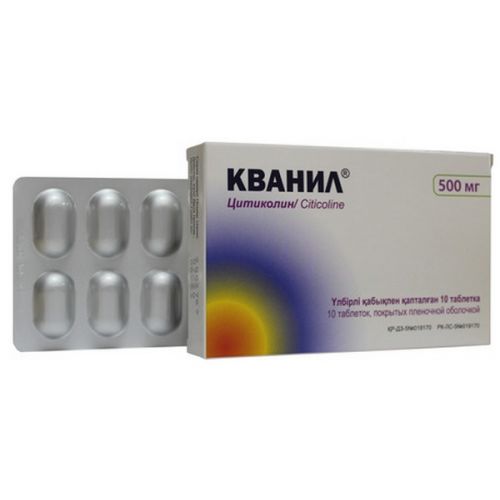 Pharmacokinetics Tsitikolin properties is almost completely soaked up at oral introduction. After administration of drug the increase in level of sincaline in blood plasma is observed. Bioavailability at oral and parenteral ways of introduction almost identical.
Drug is metabolized in intestines and a liver with formation of sincaline and cytidine. Tsitikolin is distributed in brain tissues, at the same time sincaline is implemented into phospholipids, cytidine – in cytidine nucleotides and nucleic acids. Tsitikolin quickly reaches tissues of a brain and is actively built in cell membranes, cytoplasmic and mitochondrial membranes, activating functions of phospholipids.
Only the insignificant quantity of the entered dose of a tsitikolin is removed with urine and a stake (less than 3%). About 12% of the entered dose are removed through airways. Removal of drug with urine and through airways has two phases: the first phase – fast removal (with urine – for the first 36 hours, through airways – for the first 15 hours), the second phase – slow removal. The main part of a dose of drug joins in metabolism processes.
A pharmacodynamics
Quanil – nootropic drug. Tsitikolin, being a predecessor of key ultrastructural components of a cellular membrane (mainly phospholipids), has a broad spectrum of activity: promotes restoration of the damaged cell membranes, inhibits action of a phospholipase, interfering with education of free radicals, also prevents death of cells, affecting apoptosis mechanisms.
Quanil is a sincaline source, increasing synthesis of acetylcholine, and stimulates biosynthesis of structural (basic) phospholipids in a membrane of neurons.
Improves transfer of nervous impulses in cholinergic neurons, positively affects plasticity of neuronalny membranes and function of receptors. Improves a cerebral blood stream, strengthens metabolic processes in a brain, activates structures of a reticular formation of a brain.
In an acute period of a stroke reduces the volume of the damaged fabric, improves cholinergic transfer.
Quanil softens symptoms which are observed in a hypoxia and ischemia of a brain, including a memory impairment, emotional lability, a bezinitsiativnost, difficulties during the performing of daily actions and self-service.
In a craniocereberal injury reduces duration of a posttraumatic coma and expressiveness of neurologic symptoms.
Quanil has antiedematous properties and reduces wet brain thanks to the stabilizing action by a neuronalny membrane.
Accelerates recovery and reduces duration and intensity of a posttraumatic syndrome.
Quanil is effective at treatment of cognitive, sensitive and motive neurologic disorders of a degenerative and vascular etiology.

Indications
– treatment of complications and consequences of disturbances of cerebral circulation
– a craniocereberal injury and its consequences
– the cognitive, sensitive, motor and neurologic disorders caused by cerebral pathology of degenerative and vascular origin

the Route of administration and doses
the Recommended dose makes from 500 to 2000 mg a day (1–4 tablets).
Doses of drug and the term of treatment depend on weight of damages of a brain and are established by the doctor.
Patients of advanced age do not need correcting of a dose.

Medicinal interactions
Quanil enhances effects of L – dihydroxyphenylalanin and a levodopa.
It is not necessary to apply along with medicines which contain Meclofenoxatum.
During administration of drug it is impossible to take alcohol.

Special instructions
the patients suffering from a trimetilaminuriya, Parkinson’s disease, epilepsy and to patients with a depression in the anamnesis need to use the Drug Quanil with care.
Use in pediatric practice
Is not present sufficient data concerning use of a tsitikolin to children therefore it is not necessary to appoint Quanil of this age category of patients.
Use during pregnancy or feeding by a breast
Use of drug during pregnancy and during feeding by a breast perhaps only when the expected advantage for mother exceeds potential risk for a fruit or the child.
Features of influence of medicine on ability to run the vehicle or potentially dangerous mechanisms
In individual cases some side reactions from the central nervous system can affect ability to run motor transport or to work with difficult mechanisms.
Therefore during treatment it is necessary to adhere to care at control of motor transport or work with other mechanisms.

Overdose
Because of hypotoxicity the developing of intoxication is improbable, even in cases when therapeutic doses are accidentally exceeded.
At accidental exceeding a dose the symptomatic therapy is carried out.

Storage conditions
In the dry, protected from light place, at a temperature not above 25 °C.
To store out of children’s reach!

2 years
not to use a period of storage after the expiry date specified on packing.