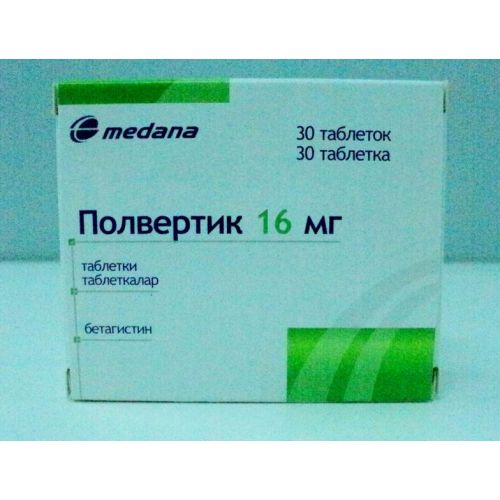 Pharmacotherapeutic group
of Means for elimination of dizziness.
The code of automatic telephone exchange N07C A01

Pharmacokinetics Betagistin properties after intake is soaked up completely. At reception on an empty stomach of a betagistin, marked C14, the maximum concentration in blood plasma is observed about 60 minutes later.
Betagistin is brought, generally in the course of metabolism which are allocated with urine. 85-90% of the radioactivity connected with introduction of a dose of 8 mg are regenerated in urine 56 hours later. The maximum speed of discharge is observed in 2 hours after introduction. In case of intake the concentration of a betagistin in blood plasma is very low. So assessment of pharmacokinetic properties of medicine is based on definition in plasma of concentration of 2-pyridylacetic acid.
Proofs of presistemny metabolism of medicine are absent. It is estimated that discharge with bile does not play an essential role in medicine elimination, any of its metabolites.
Communication with proteins of blood plasma is weak or is absent, however betagistin is exposed to metabolism in a liver. About 80-90% of the entered dose are allocated with urine.
The pharmacodynamics
Polvertik shows agonistic action concerning histamine receptors of H1 in peripheral vessels. It was proved by researches at people in whom the vazodilatatorny effect of a betagistin was removed as a result of introduction of a difengidramin, vlyayushchegosya the antagonist of a gistamiin. Polvertik has the minimum effect on discharge of gastric acid (and reactions at which an intermediary is H2 receptor). The mechanism of action Polvertik in Menyer’s disease is not clear. Polvertik’s efficiency at treatment of dizziness can be result of its ability to modify bleeding in an inner ear or direct influence on neurons in predoor kernels.
The single dose of Polvertik up to 32 mg at healthy faces brakes the induced nystagmus with the maximum effect 3-4 hours later from the moment of introduction. Higher doses show big efficiency in reduction of duration of a nystagmus.
Polvertik increases the capacity of an epithelium of lungs at people. It was proved as a result of observation of the reduced time of clearance of the radiotracer getting from lungs to blood. Slowing down of this action is carried out in view of preliminary oral administration of a terfenadin, the known blocker of receptors of H1.
The histamine has positive inotropic effect on heart. Increase in stroke output of heart in view of Polvertik’s use was not proved, but his action expanding blood vessels can cause a small lowering of arterial pressure in some patients. At people Polvertik has insignificant effect on glands of external secretion.

Indications
– Menyer’s disease
– dizziness, sonitus, a hearing loss and nausea
the Route of administration and doses
Adult (including older persons):
The initial dose makes from 8 to 16 mg three times a day at meal time. The maintenance dose makes from 24 to 48 mg a day.
The dose can be picked up depending on individual requirements of the patient.
Sometimes improvement is observed only several weeks of treatment later.
Duration of treatment is established by the doctor.

Side effects
Seldom (≥ 1/10,000 to <>
– an illness from digestive tract
– nausea, dyspepsia
Very seldom (
-disturbance of immunity
– skin rashes and
naggers Chastota it is not established
– a headache
– sometimes drowsiness.
It is necessary to report about emergence of all side (unusual) effects including which are not specified in the instruction to the attending physician.

Medicinal interactions
otsustvut the Confirmed cases of heavy interaction.
There are messages concerning interaction with ethanol and the combined medicine containing Pyrimethaminum and dapsone and also strengthenings of influence of a betagistin salbutamol.
In view of the fact that betagistin is a histamine analog, theoretically interaction with antihistaminic drugs is possible, but still it is not described.
Special instructions
the care in the course of treatment of patients with a round ulcer or a peptic ulcer in the anamnesis in view of sporadically observed dispeptic disorder at the persons accepting betagistin Is recommended. It is necessary
to be careful at having bronchial asthma. It is necessary
to be careful when assigning a betagistin to patients with urticaria, allergic rash or allergic rhinitis as it can lead to strengthening of painful symptoms.
It is recommended to be careful at patients with considerably the lowered arterial blood pressure.
Patients cannot appoint this medicinal product with intolerance of a galactose, deficiency of lactose or disturbance of absorption of glucose galactose.
Features of influence of medicine on ability to run the vehicle or potentially dangerous mechanisms
Are available not numerous messages about the drowsiness connected with use of a betagistin. It is necessary to tell the patient that in case of a voznikaniye of this kind of simtom, he has to avoid the occupations demanding concentration as driving of vehicles or service of cars.
Overdose
Symptoms: nausea, vomiting, dyspepsia, an ataxy and spasms (in case of high doses).
Treatment: specific antidote otsustvut. Rinsing of a stomach and symptomatic treatment is recommended.

To Store storage conditions in original packing at a temperature no more than 25 °C.
To store out of children’s reach.

Period of storage
2 years.
Not to use after the expiry date specified on packing.
Prescription status
According to the prescription