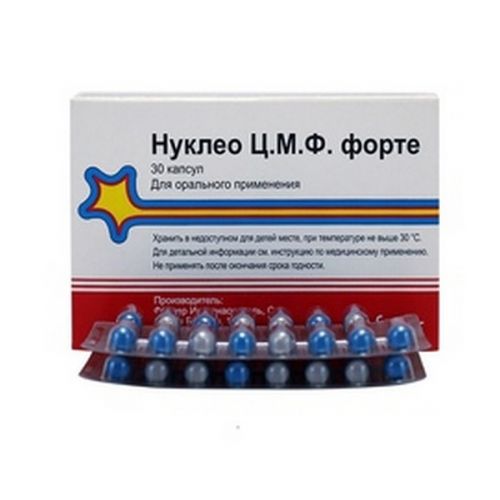 There are no data on its pharmacokinetic properties in humans. The drug Nucleo CMF Forte is an association of two nucleotides: CMP and UTP. These nucleotides are present in the body. It is for this reason that it is difficult to perform a typical pharmacokinetic analysis with drug administration and content analysis corresponding to external administration in biological fluids using conventional analytical methods, since this would require the introduction of a radioactively labeled product to allow differentiation of organic contents from external administration, and such an action is questioned. ethically and legally.

Experimental animal assays have shown that peak plasma concentrations for both CMP and UTP are reached 20 minutes after oral administration. The half-life is 1.5 to 5 hours in the alpha distribution phase. With regard to the beta phase of distribution (elimination), the half-life is about 8 hours. UTP is mainly eliminated as uridine. CMP is eliminated in the first phase as cytosine and then as uridine. However, radioactive traces were found even 72 hours after administration, confirming its contribution to the body’s metabolic processes.

From a biochemical point of view, the action of these two components can be described as follows: CMP takes part in the synthesis of a complex of lipids that form the neuronal membrane, mainly sphingomyelin, the main component of the myelin sheath. CMP is also a precursor of nucleic acids (DNA and RNA), which, in turn, are the main elements of cellular metabolism (for example, in protein synthesis). UTP acts as a coenzyme in the synthesis of glycolipids, neuronal structures and myelin sheath, complementing the action of CMP. In addition, it acts as an energy source during muscle contraction. In general, CMP and UTP are involved in the synthesis of phospholipids and glycolipids, which mainly make up the myelin sheath and other neural structures. This leads to intense metabolic activity, which in turn promotes the process of regeneration of the myelin sheath, regulating demyelination in peripheral nerve injuries. Thus, the combination of the action of CMP and UTP contributes to the regeneration of the myelin sheath, the correct conduction of nervous excitation and the restoration of muscle trophism. Nucleo C.M.F. forte provides the body with the phosphate groups needed to combine monosaccharides with ceramines to form nerve sheaths, and phosphatidic acids that make up sphingomyelin and glycerophospholipids, the main components of the myelin sheath. Thus, a stable trophic effect, more complete maturation and regeneration of axonal nerve fibers is ensured. As a result, inflammation decreases and the sensitivity of the damaged axon site normalizes, which contributes to the restoration of axonal transport.

The course of treatment, if necessary, up to 6 months.

Have not been described, but in case of any adverse reactions associated with the use of the drug, consult your doctor.

The feasibility of taking is determined depending on the prevalence of the benefits of taking over the potential risk.

Due to the low toxicity of the drug, the likelihood of an overdose is small.

Store at a temperature not exceeding 30C.
Keep out of the reach of children!
Shelf life – 2 years
Do not use after the expiration date.