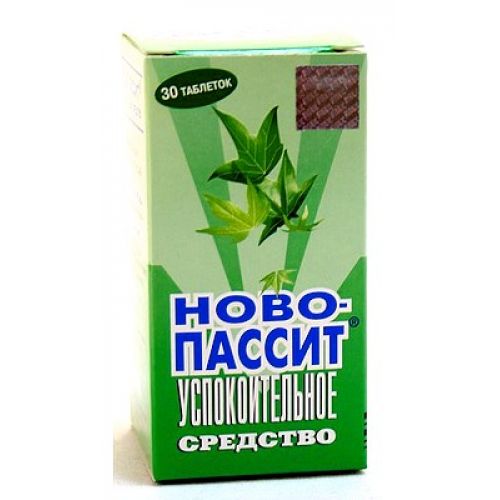 The instruction for medical use of NEW PASSITUM medicine

of the Tablet, coated

NEW PASSITUM extract of dry 157.5 mg (a valerian medicinal, a melissa medicinal, the St. John’s wort which is made a hole, a hawthorn ordinary, an inkarnat passionflower (passionflower), hop ordinary, elder black)),

of the Tablet of an oval form, coated pale green color from risky.

the NOVO-PASSSIT-Pharmacological properties the combined drug consisting of complex extract of herbs with mainly sedative action (a valerian medicinal, a melissa medicinal, the St. John’s wort which is made a hole, a hawthorn ordinary, an inkarnat passionflower (passionflower), hop ordinary, elder black) and a gvayfenezina.

As a part of NEW PASSSIT the effect of synergism of anxiolytics (in this case a gvayfenezina) with the natural biologically active agents possessing sedative action (total plant extract) is used.

As a result of introduction to total extract of the gvayfenezin having high efficiency at disturbing states and fears its anxiolytic action is implemented.

Gvayfenezin is quickly soaked up in digestive tract, metabolized in a liver, contacts glucuronic acid and is brought in the form of inaktivny metabolites, mainly, with urine. Biological half-life period about 1 hour.

– the neurasthenia and neurotic reactions which are followed by irritability, alarm, fear, fatigue, absent-mindedness

– the headaches caused by nervous tension

– as symptomatic cure for neurocirculatory dystonia and a menopausal syndrome

– a pruritic dermatosis (eczema atopic and seborrheal, a small tortoiseshell).

NEW PASSITUM is accepted on 1 tablet 3 times a day. If necessary it is possible to increase a daily dose to 2 tablets 3 times a day. In case of undesirable block the morning and day doses need to be lowered on a half & frac12, tablets on reception, and an evening dose 1 tablet. The dosage can be changed depending on reaction of the patient. The interval between administrations of drug has to be 8 hours.

A pill of NEW PASSITUM should be taken together with drinks (tea, juice).

In case of gastrointestinal discomfort or emergence of feeling of nausea, the drug should be taken at meal time.

– decrease in concentration of attention

– the Increased individual sensitivity to drug components, especially to a gvayfenezin

With care it is necessary to use drug in acute diseases of digestive tract.

During treatment it is not necessary to take alcoholic beverages. Pregnancy and the period of a lactation

use of New Passitum at pregnancy and in the period of a lactation (breastfeeding) under control of the doctor is possible.

during treatment needs to refrain from occupations potentially dangerous types of activity demanding the increased concentration of attention and speed of psychomotor reactions. Medicinal interactions

Gvayfenezin who is a part of NEW PASSITUM strengthens effect of the substances having the oppressing impact on central nervous system and also ethanol.

On 10 tablets place in the blister strip packaging from aluminum foil and a polyvinylchloride film. On 1 or on 3 blister packs together with the instruction for use in the state and Russian languages place in a pack from cardboard.

On 30, 60 or 100 tablets place in polyethylene bottles with the screwing-up cover. On 1 bottle together with the instruction for use in the state and Russian languages place in a pack from cardboard.

To Store storage conditions in original packing at a temperature not over 25 of 0C.

To protect from children!

not to use drug after the expiration of the period of storage specified on packing.

Tev’s Producer the Czech Enterprises of neuter of the lake, the Czech Republic

the Address of the organization accepting in the territory of the Republic of Kazakhstan claims from consumers on quality of products (goods):
Representative office
of Tev Chesh Indastriyez of neuter about in
PK 050000 Republic of Kazakhstan
Almaty, Al-Farabi Avenue 13,
Biness Nurla Tau’s center 1v office 305,
306 Phone number, fax (727) 311-10-66, 311-10-68
E-mail of teva@teva.co.il