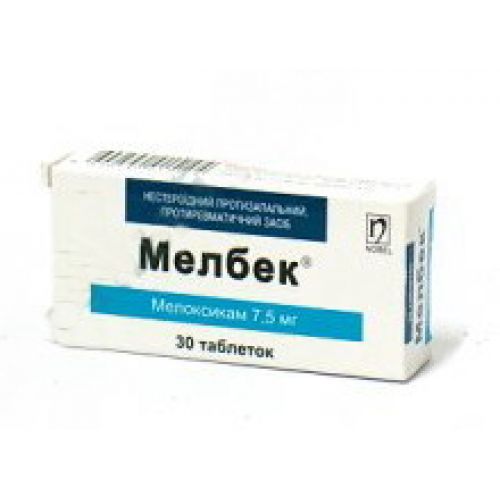 name Meloksikam Lekarstvennaya a form
of the Tablet of 7.5 mg

The description
Round tablets of light yellow color with risky on one party.

Pharmacokinetics Later properties of oral administration of 89% of drug is absorbed from a GIT. Meal does not influence absorption of a meloksikam. Constant concentration of a meloksikam in blood plasma is established within 3-5 days. Long administration of drug (more than 1 year) does not lead to increase in concentration in blood plasma in comparison with the reached level. At single daily administration of drug of fluctuation of concentration are a little expressed and are in limits of 0.4-1.0 mg/ml for a dose of 7.5 mg and 0.8-2.0 mg/ml for a dose of 15 mg. 99% of a meloksikam contact proteins of blood plasma. Meloksikam gets into synovial fluid where concentration makes 50% of its concentration in blood plasma. Meloksikam is almost completely metabolized to inactive metabolites. Elimination half-life of a meloksikam makes 20 hours.
The plasma clearance of drug averages 8 ml/min. These indications change within 30 – 40% at various patients.
The pharmacodynamics
Meloksikam is non-steroidal anti-inflammatory drug, the COG-2 selection inhibitor. Belongs to the class of oksikam, is derivative enoliyevy acid. Has anti-inflammatory, analgeziruyushchy and febrifugal effect. The mechanism is connected with decrease in synthesis of prostaglandins as a result of oppression of enzymatic activity of COG. Meloksikam more influences COG – 2, participating in synthesis of prostaglandins in the inflammation center that reduces risk of development of side effect by upper parts of a GIT and slightly influences COG-1.

Indications
– symptomatic treatment of rheumatic diseases: the pseudorheumatism
ankylosing a spondylitis (Bekhterev’s disease), reactive arthritises
– the osteoarthrosis and other inflammatory and degenerative diseases of joints and a backbone which are followed by a pain syndrome
– a pain syndrome of various etiology (dorsalgiya, myalgias, a bursitis, tendinites, fascites, a sciatica, a lumbago, toothaches, posttraumatic pains, postoperative pains)

the Route of administration and doses
of the Tablet should be accepted at meal time, washing down with water.
МЕЛБЕК® adults or teenagers can appoint only 18 years are more senior. Osteoarthrosis: 7.5 mg a day, if necessary a dose can be increased to 15 mg.
Pseudorheumatism: 15 mg a day, depending on therapeutic effect, a daily dose can be reduced to 7.5 mg.
Ankylosing spondylitis: 15 mg a day.
At a pain syndrome of various etiology the administration of drug should be begun with 7.5 mg a day, if necessary it is possible to increase a dose of 15 mg.
The maximum daily dose should not exceed 15 mg.
The recommended dose for teenagers is more senior than 18 years makes 0.25mg/kg body weight.
For patients with a heavy renal failure at a hemodialysis the dose should not exceed 7.5 mg a day.
Duration of treatment is appointed by the attending physician individually.

Side effects
– dyspepsia, an eructation, nausea, vomiting, an abdominal pain, a constipation, diarrhea, a meteorism, an esophagitis, stomatitis, gastritis
– digestive tract erosive cankers, the concealed or obvious gastrointestinal hemorrhages, colitis
– passing changes of activity of transaminases, level of bilirubin and
other indicators of function of a liver, hepatitis
– anemia, change of a leukocytic formula, a leukopenia and thrombocytopenia,
miyelodepressivny action
– an acute disorder of bronchial passability, bronchial asthma (at predisposed patients)
– headaches, dizziness, a ring in ears, a blackout, drowsiness, confusion of consciousness, orientation disturbance, change of mood
– hypostases, increase in arterial blood pressure, heartbeat, ‘inflows’ to the person
– change of indicators of function of kidneys (increase in creatinine and/or
urea of blood serum), an acute renal failure, nephrite
– an itching, skin rash, a small tortoiseshell, a photosensitization, bullous rashes, a multiformny erythema, Stephens-Johnson’s syndrome, a toxic epidermal necrolysis, a Quincke’s disease, reactions
of immediate hypersensitivity (including anaphylactic and anaphylactoid) conjunctivitis, disorders of vision (including illegibility of sight).

Contraindications
– hypersensitivity to a meloksikam or to any component of drug
– existence in the anamnesis of bronchial asthma, a polypose mucous a nose, conjunctivitis, the Quincke’s disease or skin rashes caused
by intake of acetylsalicylic acid or other NPVS
– a peptic ulcer of a stomach and duodenum in an aggravation phase
– gastrointestinal bleeding, cerebrovascular bleedings or other hemorrhagic diseases
– inflammatory bowel diseases in an aggravation phase, Crohn’s disease, nonspecific ulcer colitis
– a pain syndrome after aortocoronary shunting
– the profound heart failure
– a heavy liver and renal failure
– children’s and teenage age up to 18 years
– pregnancy and the period of a lactation

Medicinal interactions
At co-administration of a meloksikam with salicylates and other non-steroidal anti-inflammatory drugs increases risk of developing erosive cankers gastrointestinal and gastrointestinal bleedings.
At combined use of a meloksikam and anticoagulants, the tiklopidina, heparin, trombolitik raises risk of developing bleedings. Meloksikam can lead to increase in concentration of lithium in blood at use with lithium-containing drugs.
At joint appointment with a methotrexate the risk of development of a pancytopenia increases.
Simultaneous use of a meloksikam and diuretics can lead ment of an acute renal failure in patients with symptoms of dehydration of an organism. It is necessary to compensate dehydration and to watch function of kidneys.
Meloksikam weakens antihypertensive effect of β-adrenoblockers, APF inhibitors, vazodilatator and diuretics.
Holestiramin connects to meloksika in digestive tract, breaking at the same time its absorbability.
Simultaneous use with cyclosporine can lead to nephrotoxicity strengthening as to meloksika influences prostaglandins synthesized in kidneys.
Simultaneous use with other NPVS can increase risk of erosive cankers of digestive tract.
The possibility of medicinal interactions with oral antidiabetic means is not excluded.
Combined use of NPVS and antagonists of receptors of angiotensin II (also as well as APF inhibitors) enhances effect of decrease in glomerular filtration. At patients with a renal failure it can lead ment of an acute renal failure.
Drug can reduce efficiency of intrauterine contraceptives.

Special instructions
With care it is appointed to patients with diseases of upper parts of digestive tract and to the patients receiving anticoagulants to elderly people.
When developing erosive cankers of digestive tract and gastrointestinal bleedings, drug should be cancelled.
At patients with a reduced renal blood-groove and reduced OCK the administration of drug can lead to a clinically apparent renal failure which is reversible at drug withdrawal. In most cases, the patients with symptoms of dehydration, stagnant heart failure, cirrhosis, a nephrotic syndrome, diseases of kidneys receiving diuretics and patients with a hypovolemia after big surgeries are subject to risk of development of this complication. At this category of patients in an initiation of treatment it is necessary to watch a daily urine and function of kidneys carefully. In rare instances drug can cause interstitial nephrite, a glomerulonephritis, renal medullary necrosis and development of a nephrotic syndrome. The patient with a renal failure who is on a hemodialysis a dose of a meloksikam should not exceed 7.5 mg. At insignificant or moderate depression of function of kidneys (with the level of clearance of creatinine more than 25 ml/min.) correction of a dose is not required.
As well as at use of other NPVS the increase in activity of transaminases and other indicators of function of a liver can be observed, these changes are insignificant and have reversible character. If permanent and significant increase in these indicators is observed, then drug should be cancelled.
Patients at whom is in the anamnesis after prescribing of acetylsalicylic acid or other NPVS should not appoint drug symptoms of bronchial asthma, polyps mucous a nose, a Quincke’s disease, a small tortoiseshell were observed.
When using NPVS there are rare messages about development of such serious skin reactions as exfoliative dermatitis, Stephens-Johnson’s syndrome, a toxic epidermal necrolysis. The undesirable phenomena from skin and mucous membranes at patients with risk of development of the listed reactions are noted within the first month of treatment. At appearance of skin rash or damage of mucous – it is necessary to stop administration of drug immediately.
The weakened and exhausted patients can transfer side effects heavier, for such patients the careful observation is necessary. As well as other NPVS.
Use of a meloksikam, also as well as any other drug inhibiting COG or synthesis of prostaglandins can break ability to conceive and is not recommended at the women intending to become pregnant. In this regard, at women with the broken ability to conceive or undergoing inspection concerning these disturbances it is necessary to take expediency of drug withdrawal into account.
Intake of this drug by patients, the galactoses suffering from congenital intolerance, is forbidden by a Lapp-lactose intolerance or a syndrome of glyukozo-galaktozny malabsorption.
Features of influence of medicine on ability to run the vehicle or potentially dangerous mechanisms.
Certain clinical trials for the purpose of identification of effect of drug on attention and speed of reactions were not carried out. However at development of such by-effects as dizziness and a blackout, is recommended to refrain from the driving of transport and other types of activity demanding the increased concentration of attention.

Overdose
Symptoms: strengthening of side effects, dyspepsia, nausea, vomiting, an abdominal pain is possible.
Treatment: gastric lavage and performing symptomatic treatment is necessary. There is no specific antidote. It is possible to apply to acceleration of removal of a meloksikam holestiramin. The hemodialysis and an artificial diuresis are not effective.

The form of release and packing
On 10 tablets place in blister strip packaging from a film of polyvinylchloride and printing aluminum foil.
On 1, 3 planimetric pack together with the instruction for medical use in the state and Russian languages place in a pack cardboard with the hologram of firm – producer.

To Store storage conditions at a temperature not above 25 °C, in the dry, protected from light place.
To store out of children’s reach!

the e-mail address of nobel@nobel.kz