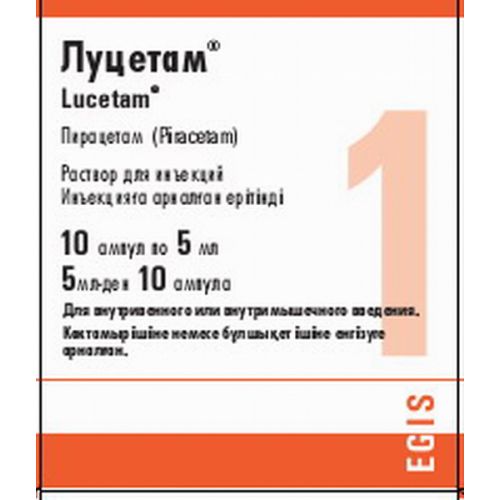 Pharmacokinetics For properties of piracetam the linear pharmacokinetics is characteristic. The bioavailability of drug is nearly 100%. The maximum concentration in cerebrospinal fluid is reached in 2-8 hours. Elimination half-life of piracetam from blood plasma is equal 4-5 hours, and from cerebrospinal fluid – 6-8 hours. Linking with proteins of blood plasma of 15%. Piracetam collects in tissues of a cerebral cortex and cerebellum, a kernel having a tail, a hippocampus, a lateral cranked body and a vascular texture of a brain. Piracetam gets through hematoencephalic and placentary barriers (concentration at a fruit reaches 70-90% of its concentration in a maternal organism) and gets to breast milk. Drug is emitted with kidneys in not changed form. After single introduction of 90-100% of the entered dose it is allocated within 24-30 hours. Piracetam is exposed to dialysis (efficiency of extraction of 50-60%).
The pharmacodynamics
Piracetam – active agent of the drug Lutsetam® – is nootropic means with the difficult mechanism of action. Effects of piracetam are connected with stimulation of nucleotide metabolism in neurons, increase in level of glucose and utilization of oxygen in a brain and also strengthening of cholinergic and dofaminergichesky mechanisms of transfer of excitement in nervous tissue. Piracetam has property of dose-dependent binding with phospholipidic bisloy cellular membranes, and it restores their structure and thus increases fluidity and improves function of membranes. Луцетам® renders favorable effects on brain microcirculation and metabolism of a brain of patients with brain ischemia as it improves regional blood supply in ischemic areas without strengthening of perfusion of intact zones of a brain. Луцетам® renders positive haemo rheological effect: increases elasticity of erythrocytes, reduces aggregation of thrombocytes and adhesion of erythrocytes to walls of blood vessels, weakens a spasm of capillaries. Besides, piracetam directly stimulates synthesis of prostacyclin in an intact vascular wall. Луцетам® has the tire-tread and restoring effect at dysfunction of a brain owing to a hypoxia, toxic and electroconvulsive influences, an injury or after these states. Луцетам® improves cognitive functions (training process, memory, attention, consciousness) at persons with cognitive disturbances and without disturbances. These effects are not connected with sedative or promoting effect.

Indications
Symptomatic treatment
– psychoorganic disorders (in particular at the patients suffering from the memory disturbance, dizziness lowered by concentration of attention and the general activity, behavior disorder, disturbance of gait and also at patients of advanced age with Alzheimer’s disease and senile dementia of Altsgeymerovsky type)
– consequences of disturbances of cerebral circulation (aphasia, disturbances of the emotional sphere, physical and mental activity)
– the period of recovering from injuries and intoxications of a brain
– a cortical myoclonia as mono – or complex therapy
– dizziness and disturbance of sense of equilibrium (except the disturbances connected with vascular disorders and mental uncertainty)
– as a part of complex therapy
– an alcoholic abstinence syndrome and also the cognitive disturbances connected with chronic abuse of alcohol
– low learning ability at children (in that with number by logopedic methods) for increase in efficiency of children with difficulty of training and a dizleksiya.

The route of administration and doses
to use Drug strictly on doctor’s orders!
The dose should be selected individually according to disease severity and also reaction to drug. The daily dose is recommended to be divided into 2-4 equal doses. Duration of treatment is defined by a clinical condition of the patient. At parenteral administration of high doses of drug the improvement of a state is expected during several days. Further pass to the oral Lutsetama® form. Treatment continues throughout the entire period of a disease. In chronic diseases the optimum effect of drug is usually reached within 6-12 weeks. In 3 months it is necessary to analyze treatment outcome and to resolve an issue of expediency of its continuation. If further use of drug is considered expedient, then approximately each 6 months it is recommended to reduce a dose or to completely cancel administration of drug. Depending on a disease etiology – with good effect of drug – treatment can continue several months, and in case of Alzheimer’s disease – even several years.
The recommended doses at various indications:
Drug is appointed intravenously or intramusculary in a daily dose of 30-160 mg/kg (3-12 g/days), frequency rate of introduction – 2-4 times/days.
Symptomatic treatment of a psychoorganic syndrome: 2.4 – 4.8 g/days in 2-3 receptions.
Treatment of consequences of disturbances of cerebral circulation: 4.8-6 g/days in subacute or chronic diseases (lasting more than 15 days).
Cortical myoclonia: an initial dose – 7.2 g/days then if necessary it is possible to raise a dose on 4.8 g with intervals of 3-4 days to 24 g/days. Further, depending on improvement of a condition of the patient, gradual decrease in a daily dose with intervals of 2 days (is recommended 3-4 days at Lance-Adams’s syndrome) on 1.2 g in order to avoid sudden exacerbation of a disease or convulsive attacks at drug withdrawal. It is recommended to apply usual doses of other drugs to treatment of a cortical myoclonia, their doses can also be reduced further at improvement of a condition of the patient.
Dizziness and disturbance of sense of equilibrium: 2.4 – 4.8 g/days in 2-3 receptions.
In an alcoholic abstinence syndrome: 12 g/days, a maintenance dose on 2.4g/days.
For correction of the lowered learning ability at children at the age of 6-13 years: the maximum recommended dose of 3.2 g/days in 2 receptions, in combination with logopedic treatment.
Dose adjustment in a renal failure:

The clearance of creatinine

a Half of a usual dose

a Quarter of a usual dose

of Lutsetam® in the form of slow intravenous infusion is recommended to apply at acute conditions, the complicated or impossible administration of drug inside (swallowing disturbance, unconsciousness of the patient). Solution can also be entered intravenously within several minutes without additional cultivation. Луцетам® solution for injections is compatible to the following infusion solutions: glucose of 5%, 10%, 20%, fructose of 5%, 10%, 20%, a levuloza of 5%, sodium chloride of 0.9%, a dextran of 40 – 10% in 0.9% – the number NaCl solution
a dextran of 100 – 6% in 0.9% – the number NaCl solution, sterile HAES of 6%, Ringera solution, Ringera solution with a lactate, Mannitolum dextran.
Infusion solution with addition of piracetam is stable within not less than 24 hours.

Side effects
Side effects, with a frequency less than 5%
– nervousness, irritability, alarm, excitement, aggression, the increased motor activity, a sleep disorder (are observed generally at the patients of advanced age receiving drug in a daily dose it is higher than 2400 mg)
Side effects with a frequency less than 2%
– nausea, vomiting, diarrhea, pain in a stomach, increase in body weight.
Seldom
– increase or a lowering of arterial pressure
– dizziness, a headache, a tremor
– increase in a libido
– allergic reactions.
Very seldom
– insomnia (paradoxical effect), fatigue
– after intravenous administration are possible morbidity and thrombophlebitis in the place of an injection and also fever and hypotension.
In isolated cases
– concern, confusion of consciousness, a hallucination, an ataxy (disturbance of gait), disturbance of sense of equilibrium, deterioration in a course of epilepsy
– a Quincke’s disease, dermatitis, a skin itching, a small tortoiseshell.
Side effects usually disappear at a dose decline.

Contraindications
– hypersensitivity to piracetam or other components of drug
– a heavy renal failure (glomerular filtration rate is lower than 20 ml/min.)
– a hemorrhagic stroke
– pregnancy and the period of a lactation.
– the children’s age up to 6 years

Medicinal interactions
Simultaneous use with the drugs stimulating the central nervous system can enhance their stimulating effect.
Simultaneous use with neuroleptics can lead to increase in motor activity.
Simultaneous use with hormones of a thyroid gland (T3+T4) can enhance the central effects (tremor, concern, sleep disorders, confusion of consciousness).
Reception of Lutsetama® in a dose of 20 mg/days does not change peak and a curve of level of concentration of antiepileptic drugs (carbamazepine, Phenytoinum, phenobarbital, sodium Valproatum) at the patients with epilepsy receiving drug in a constant dose.
Simultaneous use of Lutsetama® (1.6 g) with ethanol does not influence the level of concentration of each of these substances in blood plasma.
Луцетам® in high doses (9.6 g/days) increases efficiency of an atsenokumarol at patients with venous thrombosis (more significant decrease in level of aggregation of thrombocytes, the level of fibrinogen, Villebrand’s factors, viscosity of blood and plasma in comparison with use only an atsenokumarol was noted).
In in vitro tests of concentration of piracetam 142, 426 and 1422 of mkg/ml did not suppress liver enzymes of a system of R-450 cytochrome of the person (CYP 1A2, 2A6, 2B6, 2C8, 2C19, 2D6, 2E1, 3A4/5, 4A9/11). Therefore, metabolic interaction of Lutsetama® with other drugs is improbable.

Special instructions
At decrease in renal function the drug should be administered in reduced doses and at regular control of indicators of function of kidneys. At patients of advanced age the function of kidneys should be checked prior to administration of drug.
In epilepsy and other spasmophilic conditions of Lutsetam® can reduce a threshold of convulsive readiness.
Detailed consultation of the expert is necessary for change of the established anticonvulsant therapy of patients with epilepsy even if Lutsetam® will improve a condition of the patient.
As Lutsetam® slows down aggregation of thrombocytes, it is necessary to appoint with care drug to patients with fibrillation disturbances, at hemorrhagic states or after extensive surgeries.
At treatment of a cortical myoclonia, sudden drug withdrawal can cause resuming of attacks.
Use in pediatrics
is not recommended to use Drug at children up to 6 years due to the lack of data on its efficiency and safety at children’s age.
Drug is used as a part of complex therapy at children, especially in cases of acquisition of specific skills of reading, the letter, account which cannot be explained with mental retardation or inadequate training.
Features of influence of medicine on ability to run the vehicle or potentially dangerous mechanisms
Clinical data on influence of Lutsetama® on these abilities are absent, however taking into account possible side effects of Lutsetama® such influence cannot be excluded. Therefore the doctor has to define extent of restriction or ban for each patient individually.

Overdose
Piracetam is not toxic even in very high doses. Specific antidote does not exist. At suspicion on overdose it is necessary to perform symptomatic treatment. Piracetam can be removed by means of dialysis with efficiency of extraction of 50-60%.
A form of release and packing
On 5 or 15 ml of drug in ampoules of colourless neutral glass with a point of a break of white color. Apply on a nimbus of ampoules of 5 ml with indelible paint two rings of red color. On each ampoule paste the label from paper self-adhesive.
On 5 ampoules on 5 ml or 4 ampoules on 15 ml place in blister strip packaging from a film polyvinylchloride (PVC) and films of PETF/PE.
On 2 blister strip packagings on 5 ampoules and on 1 or 5 blister strip packagings on 4 ampoules together with the instruction for medical use in the state and Russian languages place in a pack from cardboard.

To Store storage conditions at a temperature not above 25 °C.
To store out of children’s reach!
Sterilely!