the Trade name
of Ksizal®

Pharmacokinetics Pharmacokinetic Parameters properties of a levotsetirizin change linearly and practically do not differ from pharmacokinetics of a tsetirizin.
Absorption. After intake, drug is quickly and completely absorbed from digestive tract. Meal does not affect completeness of absorption though its speed decreases. At adults after single dose of drug in a therapeutic dose (5 mg) the maximum concentration (Cmax) in blood plasma is reached in 0.9 h and makes 270 ng/ml, after repeated reception in a dose of 5 mg/days – 308 ng/ml. Constant level of concentration is reached in 2 days.
Distribution. Levotsetirizin for 90% contacts proteins of blood plasma. The volume of distribution (Vd) is 0.4 l/kg. The bioavailability reaches 100%.
Metabolism. In small amounts (& lt, 14%) it is metabolized in an organism by N- and O-dealkylation (unlike other antagonists of H1-histamine receptors which are metabolized in a liver by means of the system of cytochromes) with formation pharmacological of an inactive metabolite. Because of the low metabolic rate and lack of metabolic potential the interaction of a levotsetirizin with other medicines is represented improbable.
Dealkylation first of all is mediated with CYP 3A4, during aromatic oxidation the numerous and/or unknown CYP isoforms participate. Levotsetirizin does not influence activity of isoenzymes of CYP 1A2, 2S9, 2S19, 2D6, 2E1 and 3A4 in the concentration considerably exceeding the peak of the concentration reached at reception of a dose of 5 mg.
Thanks to low metabolism and lack of metabolic potential of suppression, interaction of a levotsetirizin with other substances, or on the contrary, is improbable.
Removal
Elimination half-life at adults makes 7.9 ± 1.9 hours. Elimination half-life at small children is shortened. The average size of the general clearance at adults is 0.63 ml/min. The main way of removal of a levotsetirizin and metabolites with urine, averages 85.4% of a dose. Discharge through excrements makes only 12.9% of a dose. Levotsetirizin is allocated with both glomerular filtration, and active canalicular secretion. At patients with a renal failure (the clearance of creatinine (CC) & lt, 40 ml/min.) the clearance of drug decreases, and T1/2 is extended (so, at the patients who are on a hemodialysis, the general clearance decreases by 80%) that demands corresponding change of the mode of dosing. Less than 10% of a levotsetirizin are removed during the standard 4-hour procedure of a hemodialysis.
A pharmacodynamics
Levotsetirizin – active agent of the drug Ksizal®, R-enantiomer of a tsetirizin which belongs to group of competitive antagonists of a histamine and blocks H1 – histamine receptors. The affinity to H1 receptors at a levotsetirizan is twice higher, than at a tsetirizin.
Levotsetirizin influences a gistaminozavisimy stage of allergic reactions and also reduces migration of eosinophils, reduces permeability of vessels, limits release of mediators of inflammation.
Levotsetirizin prevents development and facilitates a course of allergic reactions, possesses antiexudative, antipruritic action, has practically no anticholinergic and antiserotoninovy effect. In therapeutic doses does not render sedation.

The route of administration and doses
the Drug is taken inside, together with food or on an empty stomach.
Drops pour in a teaspoon or dissolve in a small amount of water. If cultivation, especially to children is used, it is necessary to use such volume of water which the patient is able to swallow. Weak solution has to be used immediately.
At calculation of drops, the bottle has to be installed down (from top to down). In case of lack of a stream of drops if the necessary quantity of drops was not brought, turn a bottle in vertical position, and then hold it upside down and continue calculation of drops.
Even if children have some data on clinical trials aged from 6 months up to 12 years, they are not the sufficient basis for use of a levotsetirizin for babies and children up to 2 years.
In this connection, purpose of a levotsetirizin is not recommended to newborns and children up to 2 years.
Children aged from 2 up to 6 years:
The daily recommended dose makes 2.5 mg in 2 receptions on 1:25 mg (5 drops twice a day).
Children aged from 6 up to 12 years:
The recommended day dose makes 5 mg (20 drops).
Teenagers of 12 years are also more senior, and adults:
The recommended day dose makes 5 mg (20 drops).
Elderly people
Correction of a dose is recommended to elderly patients with a moderate and heavy renal failure (see below Adult patients with a renal failure).
Adult patients with a renal failure
Intervals of dosing have to be individualized depending on function of kidneys. Address the following table and correct a dose as it is specified. To use this table of dosing, assessment of clearance of creatinine of the patient (KK) in ml/min. of KK (ml/min.) it is required it can be estimated on creatinine of the serum (mg/dl) determined by the following formula:

Correction of dosing for patients with a renal failure:

the Dosage and frequency

the Children having a renal failure
the Dose has to be corrected on an individual basis taking into account renal clearance of the patient and his / her body weight.
Patients with a liver failure
the Dose adjustment is not required to patients only with a liver failure. Adjustment of a dose is recommended to patients with a liver and renal failure (see above Adult patients with a renal failure).
Use duration:
Periodic allergic rhinitis (symptoms & lt, 4 days/week or less than 4 weeks) has to be considered depending on a disease and its history, treatment can be stopped only after disappearance of symptoms, and can be renewed again when symptoms appear. In case of persistent allergic rhinitis (symptoms & gt, 4 days/week and within more than 4 weeks), continuous therapy can be offered the patient during contact with allergens. For a chronic small tortoiseshell and chronic allergic rhinitis, there is a clinical experience of use of a racemate up to one year.

Side effects
Children
In placebo – controlled researches at children at the age of 6-11 months and aged from 1 year up to 6 years
– diarrhea, vomiting, a constipation, saliva hypersecretion
– thirst, feeling of hunger, fatigue, anorexia, drowsiness, psychomotor hyperactivity, sleep disorders, insomnia of average degree
– nasal bleeding
– an itching
At children at the age of 6-12 years
– a headache, drowsiness
At teenagers are more senior than 12 years and adults
– a headache, drowsiness, dryness in a mouth, fatigue
cases of side reactions (infrequently ≥ 1/1000, & lt, 1/100), such as weakness and abdominal pain Were observed.
Cases of emergence of sedative side reactions, such as drowsiness, fatigue and an asthenia were more frequent (8.1%) after reception of a levotsetirizin of 5 mg, than at intake of placebo (3.1%).
The post-marketing period
– hypersensitivity, including an anaphylaxis, a Quincke’s disease, a resistant medicinal erythema, rash, an itching, a small tortoiseshell
– increase in appetite, nausea, vomiting
– aggression, excitement, hallucinations, a depression, insomnia, suicide thoughts, spasms, paresthesias, dizziness, a faint, a tremor, a dysgeusia, a disorder of vision, the obscured sight
– heartbeat, tachycardia
– short wind
– hepatitis, an abnormal liver function
– a dysuria, an ischuria
– muscle pain
– swelled
– increase in weight

of the Contraindication
– hypersensitivity to a levotsetirizin or any of other components of drug or to any derivatives of piperazin.
– a heavy renal failure with clearance of creatinine less than 10 ml/min.
– children’s age up to 2 years
– pregnancy and the period of a lactation

Medicinal interactions
researches on studying interaction with levotsetiriziny were Not conducted (including researches with the inductors CYP3A4).
Researches of connections of a tsetirizin with a racemate did not show any clinically significant adverse interactions with antipyrine, pseudoephedrine, Cimetidinum, ketokonazoly, erythromycin, azithromycin, glipizidy and diazepam.
Small decrease in clearance of a tsetirizin (16%) was observed in a research with several doses of theophylline (400 mg once a day) while the pharmacokinetics of theophylline does not change at simultaneous use of a tsetirizin.
In a research of several doses of a ritonavir (600 mg twice a day) and a tsetirizina (10 mg a day), extent of influence of a tsetirizin was increased approximately by 40%, and pharmacokinetics of a ritonavir was slightly changed (-11%) that accompanied further absorption of a tsetirizin.
Extent of absorption of a levotsetirizin does not decrease with meal though the speed of absorption decreases.
Sensitive patients have a simultaneous use of a tsetirizin or levotsetirizin and alcohol or other depressants of central nervous system can have effect on the central nervous system though it was shown that the racemate of a tsetirizin does not strengthen effect of alcohol.

Special instructions
the Patients accepting Ksizal® should abstain from alcohol intake.
With extra care to accept to patients with the contributing ischuria factors (defeat of a chord of a spinal cord, a prostate hyperplasia) as levotsetirizin can increase risk of development of an ischuria.
Metilparagidroksibenzoat and propilparagidroksibenzoat, the drops which are contained in composition of the drug Ksizal® for intake, can cause allergic reactions (perhaps, with a delay).
Pregnancy and the period of a lactation
Pilot studies on animals did not reveal any straight lines or indirect adverse effects of a levotsetirizin on the developing fruit, including in the post-natal period, the course of pregnancy and childbirth also did not change.
Clinical trials on safety of use of a levotsetirizin at pregnancy were not conducted. Therefore drug should not be used at pregnancy.
Levotsetirizin is allocated with breast milk therefore in need of its use in the period of a lactation the breastfeeding for the period of administration of drug should be stopped.
Features of influence of medicine on ability to run the vehicle and potentially dangerous mechanisms
Comparative clinical trials did not reveal proofs that levotsetirizin in the recommended dose reduces intellectual activity, reaction or ability to run transport. Nevertheless, some patients can test drowsiness, fatigue and weakness at therapy levotsetiriziny. Thus, patients who intend to conduct motor transport, to be engaged in potentially dangerous types of activity or to operate mechanisms have to pay attention to the above-stated reactions.

Overdose
Symptoms: drowsiness (at adults), the excitement and concern which are replaced by drowsiness (at children).
Treatment: right after administration of drug inside it is necessary to wash out a stomach or to cause vomiting. Prescribing of activated carbon, performing symptomatic and maintenance therapy is recommended. There is no specific antidote. The hemodialysis is inefficient.

A form of release and packing
On 10 ml of solution in bottles of dark glass (type III) with a capacity of 15 ml supplied with a dropper from polyethylene of low density with the screw-on cover from white polypropylene with protection against opening by children. On 1 bottle together with the instruction for medical use in the state and Russian languages place in a cardboard pack.

To Store storage conditions at a temperature not above 30 °C in the place protected from light.
To store out of children’s reach!

A period of storage
3 years
After the first opening of a bottle – 3 months.
Not to apply after the expiry date specified on packing.

the Owner of the registration certificate
of YuSB S.A. Farshim, Switzerland
the Industrial zone of Plansha,
Shmen de Croi of Blanch 10,
SN-1630 to the Bull, Switzerland 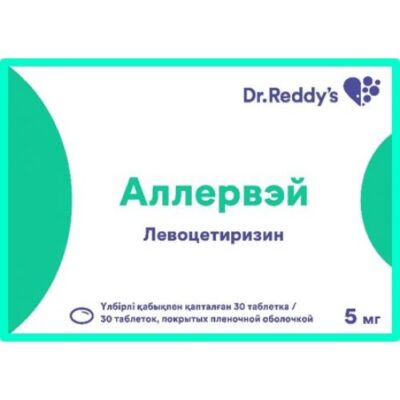 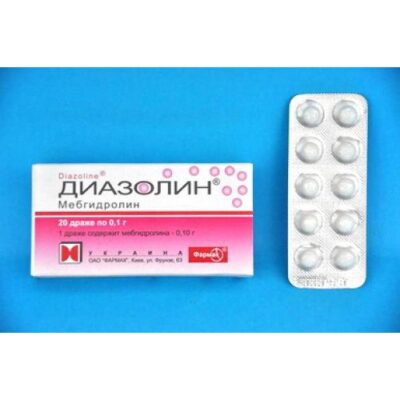 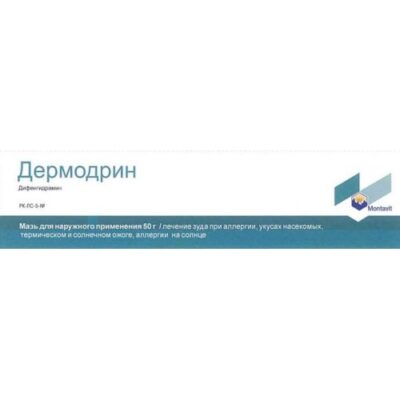 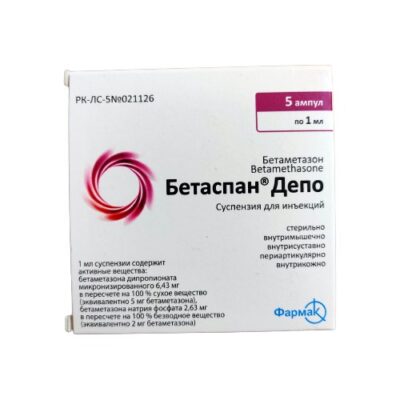