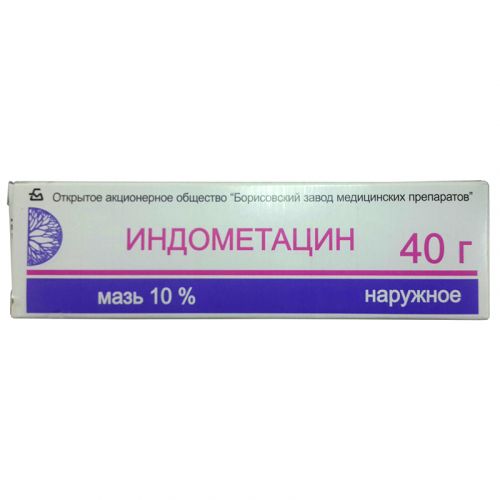 The description
Ointment from light yellow till dark yellow color with a specific smell of menthol, uniform consistence.

Pharmacokinetics Later properties of drawing drug is soaked up and defined on skin in hypodermic fabrics in 5 min. The amount of indometacin which is soaked up through skin in proportion to time of contact of ointment with skin and the areas of drawing depends on a total dose of ointment and extent of hydration of skin. After applique on the site of skin of 500 cm2 of a strip of ointment of 2.5 cm the absorption of indometacin is about 3-5%. Simultaneous use of an occlusive bandage during 10 h leads to increase in absorption of indometacin by 3-4 times. After putting indometacin on skin in a projection of joints of a brush and a knee joint the concentration of indometacin in plasma is 150-170 times lower, than after reception of tablets of indometacin inside. Gets into a synovial membrane and sinovilny liquid of a joint where is defined within 5-8 days.
In blood reversibly contacts proteins of plasma (about 99%). The absorbed part of indometacin is exposed to metabolism in a liver with formation of inactive metabolites. The final period of semi-elimination (T½) is 4-9 h. About 30% of the entered dose are removed in the form of metabolites with excrements, 70% of a dose of drug are removed with urine. In not changed look no more than 30% of the absorbed substance are removed. The system clearance of indometacin is 1-2 ml/kg/min.
The pharmacodynamics
Ointment of indometacin has anti-inflammatory and analgeziruyushchy effect.
The mechanism of action is connected with inhibition of activity of cyclooxygenase I and II of types. Indometacin inhibits TsOG-I in comparison with TsOG-II an enzyme isoform stronger (the index of selectivity TsOG-I: TsOG-II=22.3-33.0). Disturbance of activity of TsOG-I provides the best elimination of a sharp pain syndrome whereas blockade of TsOG-II mediates perception of chronic pain. As a result of blockade of COG, reactions of an arachidonic cascade of synthesis of eicosanoids and formation of prostaglandins PgE2, PgF2a, TxA2 thromboxane, PgI2 prostacyclin are broken. In bólshey degrees, than when using other means, synthesis of PgF2a is broken. Suppresses activation of NF-kB – a factor of a transcription of genes which is necessary for synthesis of a number of inflammatory cytokines (IL-1,6,8, TNF-a) and molecules of cellular adhesion (ICAM-1, VCAM-1). For lack of synthesis of these cytokines the activity of chronic inflammatory process is suppressed. Indometacin contacts NO-SYNTHASE and breaks products NOB result in a cell NO – dependent synthesis of the new molecules TsOG-II and products of prostaglandins under its influence decreases.
In rheumatic diseases has anti-inflammatory and analgeziruyushchy effect. Weakens a rest pain and at the movement, reduces morning constraint and a swelling of joints, improves their function. By efficiency of anti-inflammatory action exceeds acetylsalicylic acid.
The Analgeziruyushchy effect arises in 30-60 min. after applique of ointment and remains within 6-9 hours, the maximum action is noted 2-3 hours later after applique. The Analgeziruyushchy effect of indometacin is shown irrespective of its anti-inflammatory action and is connected only with the pain caused by damage of fabric or inflammatory process. At dishormonal pain syndromes (algodismenoreya) or pains of vascular origin (sciatica) it practically does not render analgetic effect.

Indications
– posttraumatic inflammations of sinews, ligaments, muscles and joints
– the localized forms of inflammation of soft tissues (tendovaginitis, a tendinitis, a bursitis)
– myalgia
– a lumbago
– inflammatory and degenerative diseases of the musculoskeletal system (the deforming osteoarthrosis, the rheumatic arthritis ankylosing a spondylarthritis, osteochondrosis).

Route of administration and doses
Outwardly. Apply 3-4 times a day on sore joints or parts of the body, rubbing in skin. For fixing of drug in the site of application use occlusive bandages. The total amount of ointment for adults in day should not exceed 15 cm which are squeezed out from a tuba for children – 7.5 cm. Duration of a course of treatment is determined by the doctor.

Side effects
– allergic reactions
– an itching and a dermahemia, rash, xeroderma, burning in the place of applique
– systemic side effects (the NPVP-gastropathy, nausea, vomiting, heartburn, anorexia, a headache and dizziness, disturbances of taste, illegibility of visual perception, a proteinuria, interstitial nephrite)
– exacerbation of psoriasis

of the Contraindication
– hypersensitivity to drug components
– exacerbation of a peptic ulcer of a stomach and a 12-perstny gut
– hypocoagulation
– chronic diseases of kidneys
– pregnancy and the period of a lactation
– disturbance of integrity of integuments
– children’s age up to 14 years.

Medicinal interactions
Due to the low system absorption indometacin ointment practically does not enter any interactions with other medicines.
At simultaneous use with non-steroidal anti-inflammatory drugs for system use enhances their effect, strengthening of gastrotoksichesky action at the same time can be observed.
At combined use with ointment of heparin strengthening of analgetic and anti-inflammatory effect of both medicines is noted, the anticoagulating effect of heparin is exponentiated.
Menthol, capsaicin drugs, essential oils at simultaneous applique together with ointment of indometacin enhance its analgetic effect.
The dimethyl sulfoxide at simultaneous applique with ointment of indometacin strengthens its system absorption and increases penetration depth in soft tissues in an applique zone.

The special
instructions Drug treatment it is carried out under observation of the doctor.
At development of any side effects connected with drug use it is necessary will see a doctor.
Ointment should be applied only on the intact sites of skin, to avoid hit in eyes or on mucous membranes.
At long treatment (more than 10 days) to check a blood picture (number of leukocytes and thrombocytes).
Features of influence of medicine on ability to run the vehicle or potentially dangerous mechanisms
Drug does not affect driving and potentially dangerous mechanisms.

The overdose
Overdose of indometacin at its use in the form of ointment is improbable that is connected with its low system absorption. The likelihood of development of overdose raises at accidental or deliberate use of ointment inside.
Symptoms: a headache, dizziness, nausea, vomiting, memory disturbance, a disorientation, in hard cases – numbness of extremities, paresthesias and spasms.
Treatment: gastric lavage (in case of intake of ointment inside), the supporting and symptomatic therapy, directed to elimination of the arisen disturbances. Specific antidote does not exist. The artificial diuresis and a hemodialysis are not effective.

A form of release and packing
On 40 g in tubas aluminum. Each tuba together with the instruction for medical use in the state and Russian languages place in a pack from cardboard chrome ersatz.

to Develop the Address of the organization accepting in the territory of the Republic of Kazakhstan claims from consumers on quality of products (goods) Borisovsky Plant of Medications Open joint stock company, Republic of Belarus, Minsk Region, Borisov, Chapayev St., 64/27, ph. / fax 8-(10375177) 744280, the e-mail address of market@borimed.com