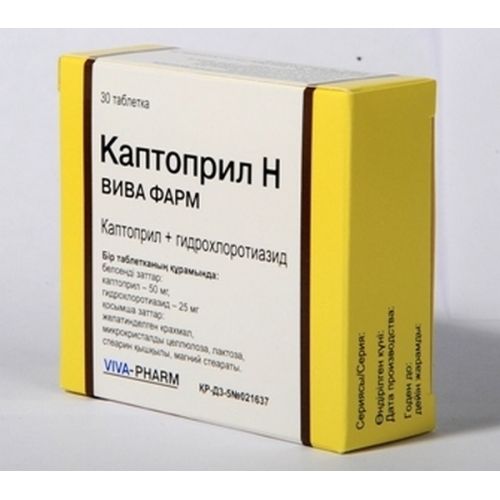 CAPTOPRIL of N of VIVA FARM

the International unlicensed name
is not present

The description
of the Tablet, white or almost white color of an oval form, with a biconvex surface, with risky on one party. Easy marbling of a surface is allowed.

Pharmacokinetics Captopril properties. After intake not less than 75% of drug are quickly soaked up from digestive tract. The maximum concentration in blood plasma is reached in 1 hour. The concomitant use of food slows down absorption of drug for 30-40%. Linking with blood proteins makes 25-30%. Elimination half-life makes less than 3 hours and increases in a renal failure. More than 95% of drug are allocated through kidneys, 40-50% in an invariable look, the rest in the form of metabolites.
Hydrochlorothiazide. After oral administration the hydrochlorothiazide is rather quickly soaked up. The average time of semi-removal from plasma after administration of drug on an empty stomach is about 2.5 hours. The hydrochlorothiazide is quickly allocated from an organism through kidneys in an invariable look (> 95%).
The pharmacodynamics
Captopril is a vysospetsifichesky competitive inhibitor of enzyme prevrashchenich angiotensin I in angitenzin II, reduces the general resistance of peripheral vessels (afterload), preloading and resistance in pulmonary vessels, increases the minute volume of heart and tolerance to physical activity. At prolonged use reduces expressiveness of a hypertrophy of a myocardium of a left ventricle, prevents progressing of heart failure and slows down development of dilatation of a left ventricle.
The hydrochlorothiazide moderately raises a diuresis, reduces the maintenance of ions of sodium in a vascular wall and its sensitivity to vasoconstrictive influences.

The route of administration and doses
VIVA FARM Captopril H should be accepted in 1 hour prior to food as in the presence of food the absorbability of drug decreases.
Doses have to be selected individually according to a clinical picture of a disease.
Initial dose 1/5 tablets once a day. The expected therapeutic effect occurs in 6-8 weeks after an initiation of treatment. Correction of a dose should be carried out with 6 weeks intervals if more rapid change of a dosage is not required.
If necessary the dose can be increased to maximum – 2 tablets a day.
Performing therapy is recommended by minimum effective maintenance dose.

Side effects
– arterial hypotension (including. orthostatic hypotension), tachycardia
– hyperaemia of the person, feeling of heat, are possible arrhythmias, stenocardia, a myocardial infarction, disturbances of cerebral circulation, Reynaud’s syndrome
– dry cough, a bronchospasm
– a proteinuria, an acute renal failure, a nephrotic syndrome, nephrite, a polyuria, an oligouriya, urination increase, impotence a glycosuria, a hyperuricemia
– a hyperpotassemia, a hypomagnesiemia, a hyponatremia, a hypercalcemia
– a lipidemia
– a loss of appetite, the reversible and usually independently taking place disturbance of taste, dryness in a mouth, thirst, a hyperplasia of gums, stomatitis reminding aphthous sores
– increase in concentration of hepatic transaminases in blood plasma, a hyperbilirubinemia
– abdominal pain, diarrhea, nausea, vomiting, constipations
– acute cholecystitis
– seldom anemia, including aplastic and hemolytic forms, a leukopenia, thrombocytopenia, an eosinophilia, an agranulocytosis
– allergic reactions: the rash which is usually followed by an itching and in rare instances fervescence (as a rule, it is easy, temporary makulezno-papular character, seldom reminds a small tortoiseshell and disappears within several days at decline in dose or drug withdrawal), vesicular or bullous rashes and photosensitivity, a multiformny erythema, exfoliative dermatitis, Stephens-Johnson’s syndrome, a toxic epidermal necrolysis, a Quincke’s disease of extremities, persons, lips, mucous membranes, language, a throat or a throat
– a headache, dizzinesses, sonitus, an ataxy, parasthesias, drowsiness, a condition of depression, passing disturbances of cerebral circulation
– disturbance of visual acuity.

Contraindications
– hypersensitivity to captopril and other inhibitors of the angiotensin-converting enzyme (ACE), (for example, at development of a Quincke’s disease during treatment by any other inhibitor of APF angiotensin-converting enzyme) and also to a hydrochlorothiazide or to sulfonamide derivatives.
– the profound renal failures (concentration of creatinine in blood plasma more than 1.8 mg / 100 ml or clearance of creatinine less than 30 ml/min.)
– a bilateral stenosis of renal arteries or a stenosis of arteries of the only kidney with the progressing azotemia
– a state after transplantation of a kidney
– a stenosis of the mouth of an aorta
– chronic heart failure
– cardiogenic shock
– arterial hypotension
– a mitral stenosis
– tachycardia
– a hypertrophic subaortic stenosis with obstruction of an output path of a left ventricle
– the profound renal failures (KK
– primary hyper aldosteronism
– a hypopotassemia, a hyponatremia at a hypovolemia, a hypercalcemia
– a heavy course of diabetes
– gout
– heavy abnormal liver functions
– a hepatic prekoma and a coma
– pregnancy and the period of a lactation
– children’s and teenage age up to 18 years.

Special instructions
With extra care it is necessary to appoint VIVA FARM Captopril H in moderate renal failures (serum creatinine less than 1.8 mg / 100 ml or KK of 30-60 ml/min.), in a proteinuria (more 1g/days), hypopotassemias (medikametozno not korregiruyushcheysya), a hyponatremia, a hypovolemia, a hypercalcemia, gout, collagenoses and other autoimmune diseases (including SLE (system lupus erythematosus), a scleroderma, a nodular periarteritis, at elderly patsiyet (65 years are more senior), at co-administration of GKS (glucocorticosteroids), tsitostatik, immunodepressants, Allopyrinolum, procaineamide, lithium drugs. In these cases especially careful control of the ABP level and laboratory indicators is required.
In an initiation of treatment VIVA FARM Captopril H can be observed excessive decrease in the ABP, especially at patients with heart failure, a severe form of arterial hypertension (including renal origin) and/or a renal failure.
It is necessary to begin treatment arterial with hypertensia with “usual” captopril.
Before an initiation of treatment VIVA FARM Captopril H needs to be carried out correction of water-salt balance (to reduce a dose of the diuretics appointed earlier or, in some cases, completely to cancel them).
Before an initiation of treatment it is necessary to carry out control of function of kidneys.
During reception VIVA FARM Captopril H it is necessary to carry out regular control of content in plasma of potassium and calcium (especially at a concomitant use of cardiac glycosides, GKS, laxative drugs and also at elderly patients), glucose, uric acid, lipids (cholesterol and triglycerides), urea and creatinine, activity of hepatic transaminases.
At appearance of fever, a hyperadenosis and/or symptoms of laryngitis and/or pharyngitis it is necessary to carry out the analysis of a picture of peripheral blood.
Appointment VIVA FARM Captopril H against the background of carrying out a hemodialysis about use of certain dialysis membranes of high-permeability (for example, poliarkillonitrilmetalilsulfonatny membranes) increases risk of development of anaphylactic reactions.
If puffiness is limited to a face and lips, such state usually passes after drug phase-out. For simplification of clinical symptoms antihistaminic drugs can be used. Patients have to be under observation of the doctor before disappearance of symptoms. If hypostasis covers language, a throat or a throat with threat of development of obstruction of airways (Quincke’s edema). It is necessary to make a subcutaneous injection of adrenaline (0.5 ml, 1:1000).
The feature of influence of medicine on ability to run the vehicle or potentially dangerous mechanisms
during treatment should refrain from occupations potentially dangerous activity demanding concentration of attention and speed of psychomotor reactions.

Overdose
Symptoms: critical lowering of arterial pressure.
Treatment: administration of plasma substitutes and a hemodialysis are effective at drug overdose.

The form of release and packing
On 15 tablets place in blister strip packaging from a film of polyvinylchloride and printing aluminum foil.
On 2 planimetric packs together with the instruction for use in the state and Russian languages put in a box of cardboard.

Storage conditions
At a temperature not above 25 °C.
To store out of children’s reach!

Period of storage
2 years.
Not to use drug after the expiry date specified on packing.

the VIVA FARM LLP Producer
2nd Ostroumova St., 33, Almaty, Republic of Kazakhstan Is released on the prescription of the doctor
to Develop