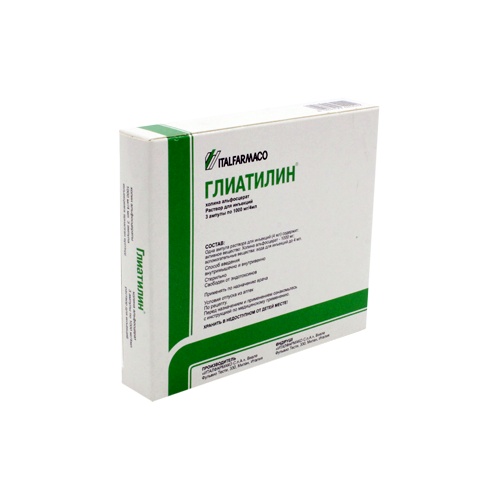 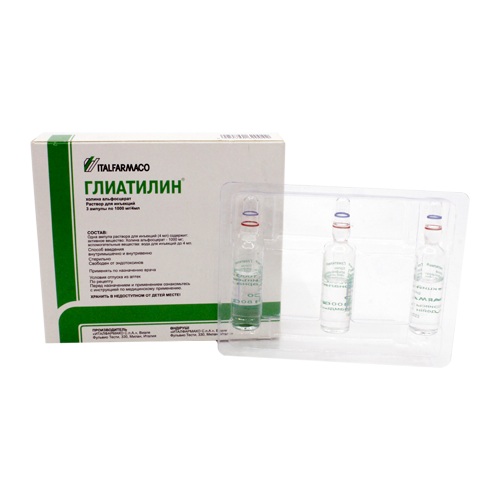 One ampoule of Gliatilin contains:

Easily penetrates the blood-brain barrier, accumulates mainly in the brain (the concentration reaches 45% of the level in the blood plasma), lungs and liver.

85% is excreted by the lungs in the form of carbon dioxide, the rest (15%) – by the kidneys and through the intestines.

Gliatilin® is a centrally acting cholinomimetic. The composition of the drug includes 40.5% of metabolically protected choline. Metabolic protection ensures the release of choline in the brain. The mechanism of action is based on the fact that when choline enters the body, alfoscerate is cleaved under the action of enzymes into choline and glycerophosphate: choline is involved in the biosynthesis of acetylcholine, one of the main mediators of nervous excitation; Glycerophosphate is a precursor of phospholipids (phosphatidylcholine) of neuronal membranes. Thus, Gliatilin® improves the transmission of nerve impulses in cholinergic neurons; promotes the restoration of damaged neuronal membranes and receptor function, prevents the development of apoptosis (prevents the death of neurons). Research results have shown that Gliatilin® has a significant positive effect on memory and intelligence, as well as on indicators of the emotional state and behavior, the deterioration of which was caused by hypoxia or the development of degenerative or vascular pathology of the brain. Gliatilin® improves cerebral blood flow, enhances metabolic processes in the brain, activates the structures of the reticular formation of the brain and restores consciousness in traumatic brain damage.

Degenerative and involutional psycho-organic syndromes and the consequences of cerebrovascular insufficiency, such as primary and secondary disorders of mnestic functions, characterized by memory impairment, confusion, disorientation, decreased motivation, initiative and ability to concentrate

Changes in the emotional and behavioral sphere in the elderly: emotional lability, increased irritability, decreased interest in the environment, senile pseudodepression

How to use Gliatilin in ampoules?

The solution is administered intramuscularly or intravenously slowly.

In acute conditions, intramuscularly or intravenously at a dose of 1 g (1 ampoule) per day. The daily dose may be increased at the discretion of the physician.

Clinically significant interactions with other drugs have not been identified.

The efficacy and safety of the drug in children has not been studied enough.

GLIATILIN does not affect the patient’s ability to drive a vehicle or potentially dangerous machinery.

Treatment: when this symptom appears, it is recommended to reduce the dose of the drug

How to store Gliatilin ampoules?

Store at a temperature not exceeding 25°C.
Keep out of the reach of children!
Shelf life – 5 years
Do not use the drug after the expiration date!