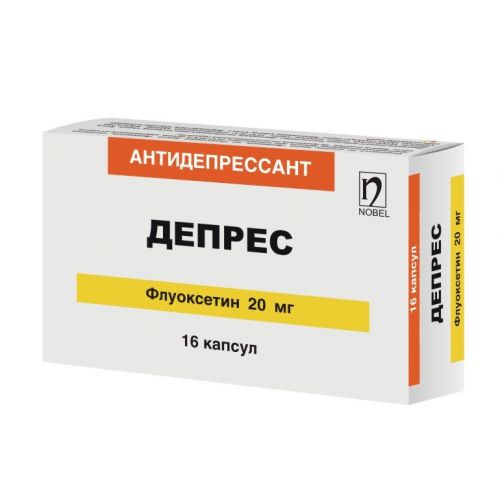 active agent – fluoxetine a hydrochloride of 22.36 mg is equivalent to fluoxetine of 20 mg,

structure of a cover of a cover: quinolinic yellow, the titan dioxide, sanst yellow FCF-FD&C–желтый 6, gelatin.

The description
Solid gelatin capsules No. 3, with the body of yellow color and a lid of light orange color. Contents of capsules – uniform powder of white color.

Pharmacokinetics Later properties of reception of a single dose of 40 mg, peak plasma concentration of fluoxetine is reached within 6 – 8 hours and makes 15 – 55 nanogrammov/ml. Meal does not affect bioavailability of fluoxetine though its absorption can be delayed. Linking with plasma proteins makes 94.5%.
Fluoxetine is quickly metabolized in a liver on norfluoksetin and other inactive metabolites. After metabolism in a liver fluoxetine is removed by kidneys. Elimination half-life of fluoxetine makes 2 – 3 days, and an active metabolite – a norfluoksetin of 7 – 9 days. Elimination half-life of fluoxetine and a norfluoksetin lasts at patients with a liver failure. Long therapy with fluoxetine at patients with a heavy renal failure can bring to drug cumulation.
The pharmacodynamics
Depres – antidepressant, derivative propylamine, chemically differs from tricyclic and tetracyclic antidepressants. Action of a depres is connected with its inhibition of the return neuronalny serotonin reuptake in the central nervous system. Fluoxetine blocks serotonin reuptake, but does not influence noradrenaline. Promotes improvement of mood, reduces sensation of fear and tension, eliminates a dysphoria. Does not cause sedation. At reception in average therapeutic doses also other systems practically do not influence functions cardiovascular.

the Route of administration and doses
Adult
the Recommended daily dose for treatment of a depression and obsessivno-compulsive neurosis – 20 mg, in the morning. If necessary the dose can be increased up to 80 mg/day. Doses over 20 mg/day is accepted twice a day, in the morning and in the evening.
The recommended dose for treatment of psychogenic bulimia makes 60 mg/day. The maximum daily dose should not exceed 80 mg.
Because of long elimination half-life of drug (2 – 3 days) and its active metabolite (7 – 9 days) concentration of drug in blood plasma remains within several weeks.
Elderly patients
the Recommended daily dose should not exceed 60 mg.
Children
Efficiency and safety of drug in children’s practice are not established.
Patients with a renal and/or liver failure
In a renal failure of average and moderate weight (level of glomerular filtration

of the Contraindication
– hypersensitivity to fluoxetine
– a heavy renal failure (level of glomerular filtration
of ml/min.)
– a concomitant use of inhibitors of a monoaminooxidase (MAO)
– epilepsy, a convulsive symptom
– pregnancy and the period of a lactation

Medicinal interactions
At simultaneous use:
– with the drugs having the oppressing impact on the central nervous system and also with ethanol, perhaps considerable strengthening of the oppressing action on the central nervous system and also increase in a likelihood of developing spasms
– with the drugs possessing high extent of linking with proteins, especially with anticoagulants or with digitoxin is possible increase in concentration in blood plasma of free (untied) drugs and increase in risk of development of adverse effects
– with drugs of lithium is possible increase in concentration of lithium and development of toxic effects
– with Phenytoinum, increase in its concentration in blood plasma and development of toxic effects
– with tryptophane, strengthening of motive concern, disturbances from digestive tract is possible
– with other antidepressants, there is an increase in their levels in plasma
– to benzodiazepines, at some patients the elimination half-life of diazepam can increase
– to monoamine oxidase inhibitors (including selegiliny or moklobemidy), owing to increase in content of serotonin and suppression of its return capture, there is a substantial increase of amount of serotonin in a synapse – a serotoninovy syndrome at which the hyperthermia, muscular rigidity, a myoclonus and also manifestations of instability of a mental and physiological condition of an organism are observed, up to a lethal outcome.

The special
instructions Fluoxetine can be applied not earlier than in 14 days after cancellation of monoamine oxidase inhibitors. The period after cancellation of fluoxetine prior to therapy by monoamine oxidase inhibitors has to be not less than 5 weeks. At use of monoamine oxidase inhibitors later a short period after cancellation of fluoxetine the lethal outcome is possible.
In the presence in the anamnesis a heart disease, respect for care at fluoxetine use is necessary. Electrocardiograms of the patients receiving fluoxetine were retrospectively checked and no disturbances of conductivity which could lead to heart block were revealed.
Fluoxetine can cause weight reduction.
At patients with diabetes the change of level of glucose in blood is possible that demands correction of the mode of dosing of hypoglycemic drugs. In the course of treatment the hypoglycemia, and after its termination – a hyperglycemia can develop.
Features of influence of medicine on ability to run the vehicle or potentially dangerous mechanisms
Fluoxetine can break thought processes therefore patients are recommended to refrain from the driving of the car and other types of activity demanding the increased concentration of attention.

Overdose
Symptoms: nausea, vomiting, excitement of the central nervous system.
Treatment: there is no specific antidote. Symptomatic therapy. Use of activated carbon with sorbitol or gastric lavage. The artificial diuresis, dialysis are inefficient.

A form of release and packing
of the Capsule of 20 mg, in the blister of 8 capsules. 2 blisters together with the instruction for use in a cardboard pack.

To Store storage conditions at a temperature from +15 °C to + 30 °C in the dry, protected from light place.
To store out of children’s reach!