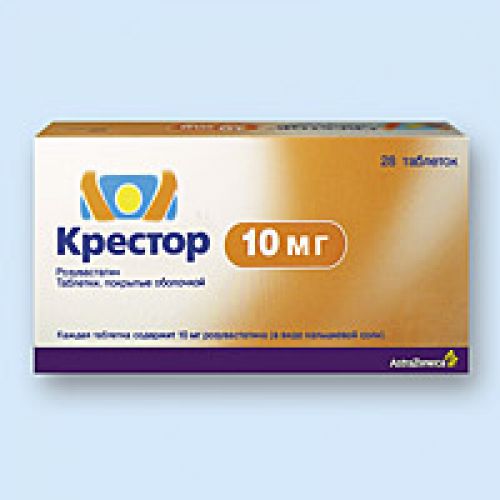 name Rosuvastatin Dosage Form
of the Tablet, coated 10 and 20 mg

Pharmacokinetics Rosuvastatin properties is a selection, competitive inhibitor of HMG-CoA reductase – the enzyme turning 3-hydroxy-3-metilglutarilkoenzim A in mevalonat, the predecessor of cholesterol. The main target of effect of rosuvastatin is the liver where synthesis of cholesterol (XC) and catabolism of lipoproteins of the low density (LDL) is carried out.
Rosuvastatin increases number of hepatic receptors of LDL by surfaces of cells, increasing capture and catabolism of LDL that leads to inhibition of synthesis of lipoproteins of very low density (LPONP), reducing thereby total amount of LDL and LPONP. The maximum concentration of rosuvastatin in blood plasma is reached approximately in 5 hours after oral administration. The absolute bioavailability is about 20%. Rosuvastatin is absorbed, mainly, by a liver. The volume of distribution of rosuvastatin is about 134 l. About 90% of rosuvastatin contact proteins of plasma, generally albumine. Rosuvastatin is exposed to limited metabolism (about 10%). Rosuvastatin is non-core substrate for metabolism by enzymes of a system of P450 cytochrome. The main isoenzyme participating in rosuvastatin metabolism is CYP2C9. CYP2C19, CYP3A4 and CYP2D6 enzymes are involved in metabolism to a lesser extent.
The main revealed metabolites of rosuvastatin are N-dismetil and lactonic metabolites. N-dismetil for about 50% is less active, than rosuvastatin, lactonic metabolites are pharmacological not active. More than 90% of pharmacological activity on inhibition of the circulating HMG-CoA reductase are provided with rosuvastatin, the rest – its metabolites.
About 90% of a dose of rosuvastatin are removed in not changed view with excrements (including the absorbed and not absorbed rosuvastatin). The rest is removed with urine. Plasma elimination half-life (T ½) makes about 19 hours. Elimination half-life does not change at increase in a dose of drug. The average geometrical plasma clearance is about 50 liters/hour (coefficient of variation of 21.7%). As well as in case of other inhibitors of HMG-CoA reductase, the membrane carrier of cholesterol who is carrying out an important role in hepatic elimination of Krestor is involved in process of hepatic capture of rosuvastatin.
System exposure of rosuvastatin increases in proportion to a dose.
The therapeutic effect appears within one week after the beginning of therapy by Krestor, in 2 weeks of treatment reaches 90% of the greatest possible effect. The maximum therapeutic effect is usually reached by 4th week and maintained at regular reception.
The pharmacodynamics
Krestor reduces the increased content of cholesterol-LDL (HS-LPNP), the general cholesterol, triglycerides (TG), increases the content of cholesterol of lipoproteins of the high density (HS-LPVP) and also reduces apolipoprotein B content (ApoV), HS-neLPVP, HS-LPONP, TG-LPONP also increases the level of A-I apolipoprotein (ApoA-I), reduces a ratio of HS-LPNP/HS-LPVP, the general HS/HS-LPVP and HS-neLPVP/HS-LPVP and a ratio of ApoB/ApoA-I.
Krestor is effective at adult patients with a hypercholesterolemia with or without gipertriglitseridemiya, regardless of race, a floor or age, and with a family hypercholesterolemia.

Indications
– primary hypercholesterolemia (the IIa type, including a family heterozygous hypercholesterolemia) or the mixed dislipidemiya (IIb type) as addition to a diet when the diet and other non-drug methods of treatment (for example, physical exercises, decrease in body weight) are insufficient
– a family homozygous hypercholesterolemia as addition to a diet and other lipidsnizhayushchy therapy (for example, LPNP-aferez), or in cases when similar therapy is not suitable the patient
– as addition to a diet for delay of progressing of atherosclerosis at adult patients as a part of therapy for decrease in levels of the LPNP general cholesterol (OHS) and XC to target levels
– prevention of cardiovascular complications at adult patients with the increased risk of developing an atherosclerotic cardiovascular disease as auxiliary therapy.

A route of administration and doses
Inside not to chew and not to crush a tablet, to swallow entirely, washing down with water. It can be appointed irrespective of meal. Prior to the beginning of and during therapy by Krestor the patient has to keep to a standard hypolipidemic diet. The dose of drug has to be selected individually depending on the purposes of therapy and the response to treatment.
The recommended initial dose for the patients beginning to take the drug or for the patients transferred from intake of other inhibitors of HMG-CoA reductase has to make 5 or 10 mg of Krestor of 1 times a day. When choosing an initial dose it is necessary to be guided by the level of content of cholesterol and to take possible risk of cardiovascular complications into account and also it is necessary to estimate potential risk of development of side effects. In case of need, the dose can be increased after 4 weeks of administration of drug. To raise a dose of drug gradually.
Due to the possible development of side effects at reception of a dose of 40 mg, increase in a dose to the maximum 40 mg can be considered only at patients with a heavy hypercholesterolemia and with high risk of cardiovascular complications (especially at patients with a family hypercholesterolemia) at which the desirable result of therapy at reception of a dose of 20 mg was not achieved. Observation of the patients receiving drug in a dose of 40 mg is recommended.
Purpose of a dose of 40 mg is not recommended to the patients who were earlier not taking the drug. After 2-4 week therapies and/or at increase in a dose of Krestor the control of indicators of lipidic exchange is necessary (if necessary dose adjustment is required).
Prevention of cardiovascular complications at adult patients with the increased risk of developing an atherosclerotic cardiovascular disease as auxiliary therapy
the Recommended dose – 20 mg once a day.
Elderly patients
dose adjustment is not required. To patients 70 years are more senior the initial dose of drug of 5 mg is recommended.
Patients with a renal failure
with a renal failure easy or moderate severity dose adjustment is not required From patients, the recommended initial dose of drug of 5 mg. At patients with moderate renal failures (clearance of creatinine less than 60 ml/min.) – use of drug in a dosage of 40 mg is contraindicated. At patients with the profound renal failure (clearance of creatinine less than 30 ml/min.) – drug Krestor use is contraindicated.
Patients with a liver failure
Experience of use of drug for patients with point higher than 9 on a scale Chayld – I Drink is absent.
Special populations. Ethnic groups
When studying the pharmacokinetic Krestora parameters at the patients belonging to different ethnic groups the increase in system concentration of rosuvastatin at Japanese and Chinese is noted. It is necessary to consider this fact when prescribing rosuvastatin to these groups of patients. The recommended initial dose for patients of Asian race makes 5 mg.
The patients predisposed to a myopathy
prescribing of drug in a dose of 40 mg is contraindicated to patients with the factors predisposed to development of a myopathy. The recommended initial dose for this group of patients makes 5 mg.
The patients having genotypes of SLCO1B1 (OATP1B1) with. 521CC and ABCG2 with. 421AA are connected with increase in influence of rosuvastatin (SKM) in comparison with SLCO1B1 with. 521TT and ABCG2 with. 421CC. To patients with genotypes with. 521CC or with. 421AA it is recommended to accept Krestor® a maximum of times a day on 20 mg.

Side effects
Often (& gt, 1/100, & lt, 1/10)
– a headache, dizziness
– nausea, an abdominal pain, a constipation
– myalgias
– an asthenic syndrome
– diabetes of the II type
Infrequently (& gt, 1/1000, & lt, 1/100)
– an itching, rash, urticaria
Seldom (& gt, 1/10,000, & lt, 1/1,000)
– hypersensitivity reactions, including a Quincke’s disease
– a myopathy, a rhabdomyolysis
– increase in level of hepatic transaminases, pancreatitis
Very seldom (& lt, 1/10,000)
– jaundice, hepatitis
– polyneuropathy
– memory loss
– a hamaturia
– arthralgias
– a depression, sleep disorders
– sexual dysfunction
Isolated cases
– interstitial diseases of lungs
of not specified frequency
– diarrhea
– the immunomediated necrotizing myopathy
– cough, short wind
– Stephens-Johnson’s syndrome
– a gynecomastia
– peripheral swell
At the patients receiving Krestor the proteinuria can come to light. In most cases the proteinuria decreases or disappears in the course of therapy and does not mean emergence sharp or progressing of the existing disease of kidneys. As well as at use of other inhibitors of GMG-KoA-reduktazy, the frequency of emergence of side effects has dose-dependent character.

Contraindications
– hypersensitivity to rosuvastatin or any of drug components
– liver diseases in an active phase, including permanent increase in serumal activity of transaminases and any increase in activity of transaminases in blood serum (more than by 3 times in comparison with the upper bound of norm)
– the profound renal failures (less than 30 ml/min.)
– myopathies
– a concomitant use of cyclosporine
– pregnancy, the lactation period, lack of adequate methods
of contraception
– predisposition to development of miotoksichesky complications
– hereditary intolerance of a galactose,
a lactose intolerance or a sprue of glucose and a galactose
For a dose of 40 mg
– a renal failure of moderate severity (clearance of creatinine less than 60 ml/min.)
– a hypothyroidism
– states which can lead to increase in plasma concentration of rosuvastatin
– a concomitant use of fibrat
– patients of Asian race
– muscular diseases in the anamnesis
– a miotoksichnost against the background of intake of other GMG-KoA inhibitors – reductase or fibrat in the anamnesis
– an alcohol abuse
Medicinal interactions
Cyclosporine
Combined use leads clearance of creatinine to increase in concentration of Krestor in blood plasma by 7 times. Does not affect plasma concentration of cyclosporine.
Antagonists of vitamin K
the Beginning of therapy by Krestor or increase in a dose of drug at the patients receiving at the same time antagonists of vitamin K (for example, warfarin), can lead to increase in a prothrombin time. Cancellation of rosuvastatin or a dose decline of drug can lead to reduction of MNO. In such cases the monitoring of MNO is recommended.
Fenofibraty / derivatives of fibroyevy
Gemfibrozil acid, fenofibrat and other fibroyevy acids, including niacin, can increase risk of emergence of a myopathy at introduction along with rosuvastatin.
Inhibitors of proteases
In spite of the fact that the dot mechanism of interaction is not known, joint intake of inhibitors of proteases can lead to significant increase in exposure of rosuvastatin. The pharmacokinetic research on simultaneous use of 20 mg of rosuvastatin with the combined drug containing two inhibitors of proteases (400 mg lopinavira/100 mg of a ritonavir) at healthy volunteers led to approximately double or fivefold increase in AUC (0-24) (to the area under a curve concentration time) and (Cmax) (the maximum concentration in blood plasma) rosuvastatin respectively. Therefore the concomitant use of rosuvastatin and inhibitors of proteases at treatment of patients with HIV is not recommended.

To Store storage conditions at a temperature not above 30 °C.
To store in places inaccessible for children.

Period of storage
3 years.
Not to apply on expiry date.

the Producer
IPR of Pharmasyyutikals of INK., Puerto Rico

the Name and the country
of the AstraZeneka YuK Limited organization packer, Great Britain

the Owner of the registration certificate
of AstraZeneka YuK Limited, Great Britain

of the AstraZeneka Razvernut company