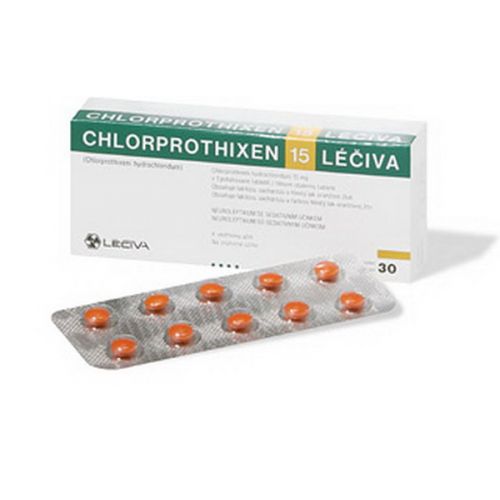 Chlorprothixene is rapidly absorbed in the gastrointestinal tract, its effect after oral administration occurs within 30 minutes. Binds to plasma proteins (over 99%). Chlorprothixene crosses the placental and blood-brain barrier and is excreted in breast milk in small amounts. The half-life is 8-12 hours. Metabolized in the liver, metabolites have no neuroleptic activity, excreted in feces and urine

Chlorprothixene is a neuroleptic derived from thioxanthene. It has antipsychotic and pronounced sedative effects. Possesses moderate antidepressant properties, has anticholinergic and adrenergic blocking effects

Chlorprothixene is intended for use in adults, adolescents and children over the age of 6 years.

– psychoses, including schizophrenia and manic states, proceeding with psychomotor agitation, agitation and anxiety

The course of treatment should be started with a low dose of the drug, gradually increasing it in the future, until a therapeutic effect is obtained. The daily dose of the drug in adults should not exceed 600 mg.

When the drug is discontinued, the dose should be reduced gradually. A quick cessation of the course of treatment with the drug, even after a few weeks, may manifest itself as vomiting, increased sweating, headache, insomnia, and anxiety.

Chlorprothixene should be taken with or after a meal, the tablets should be swallowed whole with a glass of water or milk

Chlorprothixene is usually well tolerated. The likelihood of side effects increases with prolonged use of high doses of the drug, as well as in children and the elderly.

– At the beginning of the course of treatment, increased fatigue, motor retardation, orthostatic hypotension are possible

– disorders of the hematopoietic organs in the form of changes in the picture of peripheral blood (agranulocytosis, leukocytosis, leukopenia, hemolytic anemia),

– yellowness of the skin

– allergic reactions in the form of skin rashes and itching, increased photosensitivity, photodermatitis

– changes in the endocrine status in the form of amenorrhea, galactorrhea, gynecomastia, disorders of carbohydrate metabolism, weakening of potency and libido

– increased appetite with an increase in body weight, impaired thermoregulation

– paradoxical reactions in the form of a state of excitement, agitation, irritability

– coma of any etiology

– use of the drug during pregnancy and lactation

The depressing effect of chlorprothixene on the central nervous system can be enhanced when taken simultaneously with ethanol and drugs containing ethanol, anesthetics, opioid analgesics, sedatives, hypnotics, antipsychotics.

The drug enhances the effect of antihypertensive drugs.

The simultaneous use of chlorprothixene and epinephrine can lead to arterial hypotension and tachycardia.

The use of chlorprothixene leads to a decrease in the seizure threshold, which requires additional dose adjustment of antiepileptic drugs.

The ability of chlorprothixene to block dopamine receptors reduces the effectiveness of levodopa.

The appearance of extrapyramidal disorders is possible with the simultaneous use of phenothiazines, metoclopramide, haloperidol, reserpine.

Particular care should be taken when prescribing Chlorprothixene to patients prone to alcoholism and drug addiction; patients with myasthenia gravis, angle-closure glaucoma; in patients with epilepsy, parkinsonism, with severe atherosclerosis of the cerebral vessels, with a tendency to collapse, with severe cardiovascular and respiratory failure, hematopoietic disorders, with severe liver and kidney dysfunction, diabetes mellitus, prostatic hypertrophy, as well as debilitated patients and the elderly.

Care should be taken to prescribe the drug in the treatment of electroshock, the simultaneous use of drugs with a depressing effect on the central nervous system.

The use of chlorprothixene can lead to a false positive result during an immunobiological urine test for pregnancy, a false increase in the level of bilirubin in the blood, a change in the level of the QT interval on the electrocardiogram.

During treatment with Chlorprothixene, it is recommended to refrain from drinking alcohol, avoid increased insolation, as well as extremely high or low temperature exposure.

Influence of the medicinal product on the ability to drive vehicles

Taking the drug Chlorprothixene has a negative effect on activities that require a high speed of mental and physical reactions, for example: driving vehicles, servicing cars, working at heights, etc.

In case of an overdose (intoxication) with the drug, the following symptoms are possible: drowsiness, confusion, coma, respiratory failure, arterial hypotension, tachycardia, fever, miosis. With relief of signs of intoxication, convulsions, hyperactivity, hematuria are possible.

If signs of overdose (intoxication) appear with the drug, it is necessary to flush the stomach, do not induce vomiting, as this can lead to aspiration of vomit, take activated charcoal, saline laxatives, ensure adequate breathing, urgently consult a doctor.

Treatment is symptomatic, against the background of monitoring the indicators of vital body functions. It is necessary to provide adequate breathing, appropriate correction of body temperature, control and correction of blood pressure. Epinephrine should not be used because of the risk of paradoxical arterial hypotension.