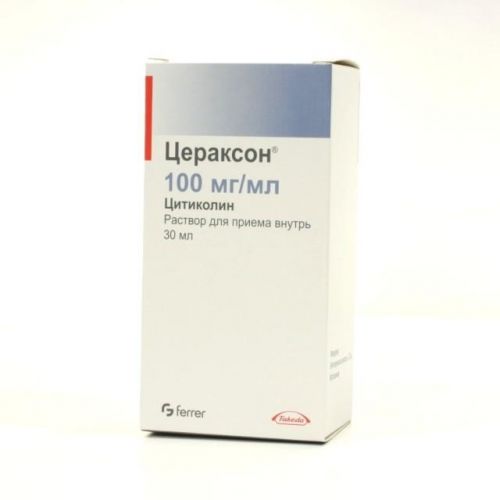 Tsitikolin Pharmacokinetics Absorption properties is well absorbed at intake. Absorption after oral administration almost full, and bioavailability approximately same, as well as after intravenous administration.
Metabolism
Drug is metabolized in intestines and in a liver with formation of sincaline and cytidine. After administration of drug the concentration of sincaline in plasma significantly increases.
Distribution
Tsitikolin is substantially distributed in structures of a brain, with rapid implementation of fractions of sincaline in structural phospholipids and fractions of cytidine – in cytidine nucleotides and nucleic acids. Tsitikolin gets into a brain and is actively built in cellular, cytoplasmic and mitochondrial membranes, forming a part of fraction of structural phospholipids.
Removal
Only of 15% of the entered dose of a tsitikolin is brought out of an organism: less than 3% – kidneys and through intestines and about 12% with the exhaled CO2 (carbon dioxide).
In excretion of a tsitikolin with urine it is possible to allocate 2 phases: the first phase lasting about 36 hours during which clearance rate decreases and the second phase during which the speed of excretion decreases much more slowly. The same is observed with the exhaled CO2 – clearance rate quickly decreases approximately in 15 hours, and then decreases much more slowly.
Pharmacodynamics
Nootropic drug. Improves transfer of nervous impulses in cholinergic neurons – positively influences plasticity of neuronalny membranes and function of receptors. Improves a cerebral blood stream, strengthens metabolic processes in a brain, activates structures of a reticular formation of a brain and restores consciousness in a traumatic brain damage.
Цераксон® is a sincaline source, increasing synthesis of acetylcholine, and stimulates biosynthesis of structural (basic) phospholipids in a membrane of neurons that promotes improvement of function of membrane mechanisms, including functioning of ion-exchange pumps and the receptors shipped in them which modulation is a necessary condition of neurotransfer.
Цераксон® softens the symptoms which are observed in a hypoxia and ischemia of a brain, including a memory impairment, emotional lability, a bezinitsiativnost, difficulties during the performing of daily actions and self-service.
Цераксон® it is effective in treatment of cognitive, sensitive and motive neurologic disorders of a degenerative and vascular etiology.
Цераксон® thanks to the membrane stabilizing activity has properties which promote reduction of wet brain. The research showed that Tserakson® inhibits activation of some phospholipases that reduces education of free radicals, avoiding destruction of membrane systems and keeping an antioxidant system as glutathione. Цераксон® protects a reserve of active neurons and inhibits apoptosis. Цераксон® also renders preventive neurotyre-tread effect in brain ischemia.
Clinical trials showed that Tserakson® improves a functional condition of patients with an acute disorder blood circulation of a brain. At patients with a craniocereberal injury of Tserakson® accelerates their restoration and reduces duration and degree of intensity of a posttraumatic syndrome.

the Route of administration and doses
the Daily dosage makes from 500 to 2000 mg (100 mg – 1 ml) depending on disease severity. The recommended frequency rate of reception 2 – 3 times a day within 6 – 8 weeks. Drug can be used as independently, and by cultivation in half of glass of water (120 ml), during meal or between meals.
Drug is appointed by means of the dosing syringe. After purpose of each dose it is recommended to wash the dosing syringe with water.
The dose and a course of reception can be changed according to the recommendation of the doctor.

Special instructions
On cold the insignificant quantity of crystals owing to temporary partial crystallization of preservative can be formed. At further storage in the recommended conditions the crystals are dissolved within several months. Existence of crystals does not affect quality of drug.
Drug contains sorbitol therefore patients with rare hereditary problems of intolerance of fructose should not accept.
Patients with rare hereditary intolerance of fructose, disturbance of absorption of glucose galactose or sucrose-isomaltose cannot take the drug Tserakson®.
Due to presence of methylparahydroxybenzoate and the propilparagidroksibenzoat, allergic reactions can also develop (including the slowed-down type).
Use in pediatrics
In children’s practice medicine is appointed if the expected therapeutic advantage exceeds possible risk.
Pregnancy and the period of a lactation
Though proofs of risk at use of drug during pregnancy or in the period of a lactation were not received, drug is appointed if the expected advantage for mother exceeds potential risk for a fruit and the child.
The feature of influence of medicine on ability to run the vehicle or potentially dangerous Tsitikolin mechanisms does not influence ability to control of vehicles and dangerous mechanisms.

Overdose
Long purpose of Tseraksona® was not followed by toxic effects regardless of a method of administration.
Symptoms: strengthening of side effects of drug.
Treatment: symptomatic.

A form of release and packing
of 30 ml of drug in a bottle from the colourless transparent glass corked by the screwing-up plastic cover.
On 1 bottle with the dosing syringe together with the instruction for use in the state and Russian languages put in a pack from cardboard.

To Store storage conditions at a temperature from 15º C to 30º C.
To store out of children’s reach!