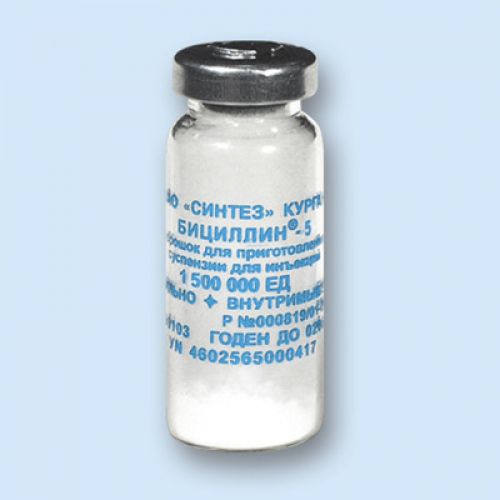 the Description
the powder, White or white with slightly yellowish shade, inclined to balling up forming at water addition resistant suspension

Pharmacokinetics of Bitsillin®-5 properties is drug of the prolonged action, high concentration of an antibiotic in blood remains up to 4 weeks.
Benzatina benzylpenicillin.
After an intramuscular injection of a benzatin, benzylpenicillin is very slowly hydrolyzed, releasing benzylpenicillin. The maximum concentration of drug in blood serum is reached in 12-24 hours after an injection. Long elimination half-life concentration in serum provides stable and long concentration of drug in blood for the 14th day after introduction 2400000ME of drug makes 0.12 mkg/ml, for the 21st day after introduction 1200000 ME drugs – 0.06 mkg/ml (1 ME = 0.6 mkg). Diffusion of drug in liquid full, diffusion in fabric very weak. Communication with proteins of plasma of 40-60%. Benzatina passes benzylpenicillin in small amounts through a placental barrier and also gets into breast milk of mother. Drug biotransformation insignificant. It is removed mainly by kidneys in not changed look. In 8 days about 33% of the entered dose are allocated.
Benzilpenitsillin.
The maximum concentration in blood plasma at intramuscular introduction is reached in 20-30 min. Elimination half-life of drug makes 30-60 min., in a renal failure of 4-10 h and more. Communication with proteins of plasma – 60%. Gets into bodies, fabrics and biological liquids, except liquor, tissues of an eye and a prostate. At inflammation of meningeal covers gets through a blood-brain barrier. Passes through a placenta and gets into breast milk. It is removed by kidneys in not changed look.
A pharmacodynamics
the Combined bactericidal antibiotic consisting of two salts of benzylpenicillin of long action. Suppresses synthesis of a cell wall of microorganisms.
It is active concerning gram-positive microorganisms:
Staphylococcus spp. (not forming penicillinase), Streptococcus spp., including Streptococcus pneumoniae, Corynebacterium diphtheriae, anaerobic spore-forming sticks: Bacillus anthracis, Clostridium spp., Actinomyces israelii,
gram-negative microorganisms: Neisseria gonorrhoeae, Neisseria meningitidis, Treponema spp.
The strains of Staphylococcus spp. producing penicillinase are resistant to effect of drug.

the Route of administration and doses
Intramusculary. The adult — on 1200000 ED+300000 PIECES of 1 times in 4 weeks, to children up to 8 years — 480000 ED+120000 PIECES of 1 times in 3 weeks, to children are more senior than 8 years – 960000 ED+ 240000 PIECES of 1 times in 4 weeks.
For preparation of suspension use sterile water for injections, isotonic solution of sodium of chloride or 0.25-0.5% solution of Procainum (novocaine).
Bitsillin®-5 suspension is prepared aseptically, just before the use (ex tempore): with drug under pressure slowly (with a speed of 5 ml for 20-25 sec.) enter 5-6 ml of solvent into a bottle. Contents of a bottle are mixed and stirred up along a longitudinal axis of a bottle before formation of homogeneous suspension. Existence of bubbles on the surface of suspension at bottle walls is allowed. Bitsillin®-5 suspension immediately after preparation is entered deeply intramusculary into an upper external quadrant of a gluteus. Grinding of a gluteus after an injection is not recommended. At an introduction delay immediately after preparation physical and colloidal properties of suspension change therefore its movement via the hypodermic needle can be at a loss.

the Contraindication glossitis
– hypersensitivity to drug, benzylpenicillin and another beta laktamnym to antibiotics
– the lactation period

Special instructions
With care: pregnancy, a renal failure, the burdened allergoanamnez, bronchial asthma, pseudomembranous colitis.
It is impossible to enter subcutaneously, intravenously, endolyumbalno, and also into perigastriums. At accidental intravascular introduction the passing feeling of depression, alarm and a disorder of vision (Uanye’s syndrome) can be noted. To avoid intravascular administration of drug, it is recommended to make before carrying out an intramuscular injection aspiration for the purpose of identification of possible hit of a needle in a vessel.
At treatment of syphilis before therapy and then within 4 months carrying out microscopic and serological examinations is necessary.
Due to a possibility of development of fungal infections it is reasonable to appoint vitamins of group B and vitamin C, and if necessary – antifungal drugs for system use.
It is necessary to consider that use of drug of insufficient doses or too early termination of treatment often leads to emergence of resistant strains of activators.
Pregnancy
of Bitsillin®-5 in small amounts gets through a placental barrier and into mother’s milk. Use of drug during pregnancy is possible only when the expected advantage for mother exceeds potential risk for a fruit.
The feature of influence of medicine on ability to run the vehicle or potentially dangerous mechanisms
does not influence.

Overdose
of Data on cases of overdose there is no drug Bitsillin®-5.

A form of release and packing
Powder for preparation of suspension for intramuscular introduction of 1200000 PIECES + 300000 PIECES in bottles with a capacity of 10 ml.
On each bottle paste the label self-adhesive or apply the text of the label on a bottle with method of an intaglio printing the fast-fixed paint.
50 bottles with 5 iinstruktion on medical use in the state and Russian languages place in a box of cardboard.

To Store storage conditions in the dry place at a temperature not above 20 °C
to Store in the places inaccessible for children!

The owner of the registration certificate
of JSC Sintez, the Russian Federation