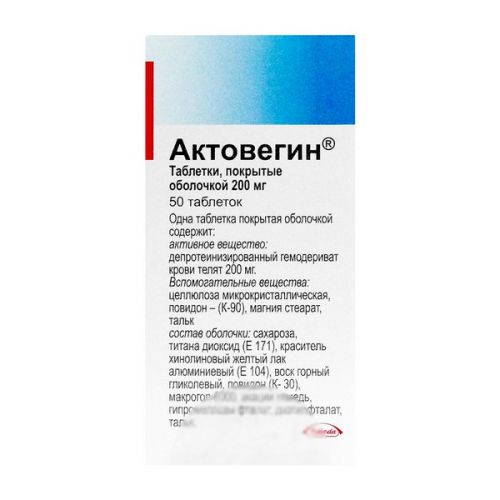 The instruction for medical use of AKTOVEGIN® medicine the Trade name of Aktovegin® the International unlicensed name Is not present the Dosage form of the Tablet, Structure One tablet coated contains coated 200 mg: active agent: deproteined hemoderivative of blood of calfs – 200.00 mg excipients: microcrystalline cellulose, povidone – (To 90), magnesium stearate, talc structure of a cover: sucrose, the titan dioxide (E 171), dye quinolinic yellow varnish aluminum (E 104), wax mountain glycolic, povidone (To – 30), a macrogoal-6000, acacias gum, gipromelloza phthalate, diethyl phthalate, talc the Description Round biconvex tablets, coated chartreuse color, the Other hematologic drugs ATX B06AB Code Pharmacological Pharmacokinetics to Study Properties shining Pharmacotherapeutic group pharmacokinetic characteristics (absorption, distribution, removal) of the drug Aktovegin® is impossible as it consists only of physiological components which usually are present at an organism. So far decrease in pharmacological effect of hemoderivatives at patients with the changed pharmacokinetics is not revealed (for example, a liver or renal failure, the metabolism changes connected with old age and also features of metabolism at newborns). Pharmacodynamics of Aktovegin® antigipoksant. Актовегин® is hemoderivative which is received by means of dialysis and ultrafiltration (there take place connections with molecular weight less than 5000 dalton). Актовегин® causes an organo-independent intensification of power metabolism in a cell. The activity of Aktovegina® is confirmed by measurement of the increased absorption and the increased utilization of glucose and oxygen. These two effects are interconnected, and they lead to increase in products of ATP, thereby more providing energy demands of a cell. Under the conditions limiting normal functions of power metabolism (hypoxia, a lack of substrate) and at the increased energy consumption (healing, regeneration) Aktovegin® stimulates power processes of functional metabolism and anabolism. Secondary effect is blood supply strengthening. Influence of Aktovegina® on assimilation and utilization of oxygen and also insulinopodobny activity with stimulation of transport and oxidation of glucose are significant in treatment of diabetic polyneuropathy (DPN). At patients with diabetes and diabetic polyneuropathy of Aktovegin® authentically reduces polyneuropathy symptoms (the pricking pain, burning sensation, parasthesias, numbness in the lower extremities). Objectively sensitivity disorders decrease, the mental health of patients improves. Indications of  metabolic and vascular disorders of a brain (including dementia),  peripheral (arterial and venous) vascular disorders and their consequences (arterial angiopatiya, venous ulcers of the lower extremities), diabetic polyneuropathy. The route of administration and doses of the Dose and a route of administration depend on a nosological form and weight of a course of the disease. Inside appoint 1 – 2 tablet 3 times a day before food. The tablet is not chewed and wash down with a small amount of water. Duration of treatment is from 4 to 6 weeks. In diabetic polyneuropathy enter 2000 mg a day intravenously for 3 weeks with the subsequent transition to the tableted form, on 2 – 3 tablets 3 times a day not less than 4-5 months. Side effects allergic reactions, a small tortoiseshell sudden emergence of heat, temperature increase of the Contraindication – hypersensitivity to drug Aktovegin® components – children’s age up to 18 years Medicinal interactions is not established Special instructions Children are not present available data Now and use is not recommended. Use during pregnancy Use of the drug Aktovegin® is allowed if the expected therapeutic advantage exceeds possible risk for a fruit. Use in the period of a lactation At use of drug in a human body was not revealed any negative consequences for mother or the child. Актовегин® it is necessary to use in the period of a lactation, only if the expected therapeutic advantage exceeds possible risk for the child. Features of influence of medicine on ability to run the vehicle or potentially dangerous mechanisms Are not present or are possible insignificant influences. The overdose Is not present data whenever possible of overdose by the drug Aktovegin®. On the basis of pharmacological data no additional undesirable effects are expected. The form of release and packing On 50 tablets place in the bottles of dark glass which are screwing up covers, supplied with control of the first opening. On 1 bottle together with the instruction for medical use in the state and Russian languages put in a pack cardboard. On a pack paste transparent protective stickers of round shape with holographic inscriptions and control of the first opening. To Store storage conditions in the place protected from light at a temperature not higher than 250 S. Hranit out of children’s reach! A period of storage 3 years not to use drug after expiry date Prescription status According to the prescription Takeda GmbH Producer, the Lenitsstrasse 70-98, 16515 Oraniyenburg, Germany of Takeda GmbH, Lehnitzstrasse 70-98, 16515 Oranienburg, Germany the Name and the country of the owner of the registration certificate of LLC Takeda Pharmasyyutikals, Russia the Address of the organization accepting in the territory of the Republic of Kazakhstan claims from consumers on quality of products (goods) Representative office Takeda Osteuropa Holding GmbH (Austria) in Kazakhstan Almaty, Shashkin St. 44

Be the first to review “ACTOVEGIN (50 coated tablets)” Cancel reply